on October 15, 2013
Today I want to discuss something a bit more serious in terms of anime. Before I start I would like to say that what I'm about to cover is my opinion, and I am in no way saying that you have to agree with me. Instead, I'd even encourage you to disagree as I'd love to hear other views on the subject!

Now for the main story... 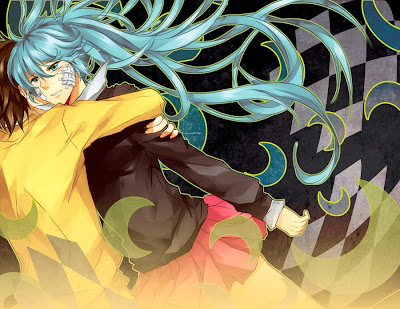 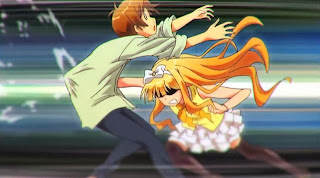 I've been watching a lot of anime as of late, and I've seen a constant reoccurring pattern. We have the lead male and the lead female, who by the end of the series will obviously be involved romantically. Say the male sees something he shouldn't, maybe he accidentally touches the female in the wrong way, or whatever the reason. Whether his actions are by accident or purposeful, the female (usually) beats the daylights out of him. Sometimes this takes place with numerous verbal insults or comments happening during or outside of the beating. We all stand around and laugh whenever things like this happen, but for what reason? Is it really funny seeing a guy getting beat up by a girl just because he accidentally did or said something he shouldn't have? Why resort to violence?


If we flip the situation, with the male hitting the female in any sort of way it's wrong. The male is labeled as a woman beater, and people criticize the person. The anime is then shoved off as "wrong" because of male on female violence. Yet, in terms of satire, a number of our population also finds this funny. Afterall it's so much fun to torture and physically abuse a girl.

Wrong....it's not right, because women are weak and fragile. After all, that's what society seems to claim.

However, I don't believe that is the reason why both forms of violence is not right. Some women may be weak and fragile, some may be proud and strong. The same applies to males, and is true for either gender. Yet, when one thinks of a man, they think of the manliness. Having large amounts of strength, acting in an aggressive manner, and becoming "tough" equates to being a man. Whereas a woman is required to be passive, and dependent even. They are not complete without a man. They cannot be strong on their own. Again, this is how society speaks. 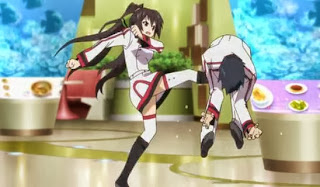 Should we listen to the general voice of society? I think not. Anime tries to solve that problem with making their woman somewhat violent and aggressive. However, I still don't think this solves the dilemma. Instead, this only leads to more in the future. Looking back at beating and violence among anime characters, it's obvious that males are getting the shorter stick. They're used as punching bags, and are expected to take punishment from females without a care, because it's wrong to retaliate. This is one of the very aspects that turned me off from Bakemonogatari. What is the point of violence if it's repetitive and proves nothing to the story other than allowing the audience to enjoy vicious beatings of a character? Is that really humorous? What if you were in that situation? What is so great about watching a person suffer?

Yes, this post is about anime...but I feel that we find this sort of thing in real life as well. For example, people fall down due to some sort of accident. (Slipping, tripping, etc) People point and laugh. They find the person's suffering to be funny. The same goes in terms of bullying, embarrassment of others, physical pain and emotional suffering is enjoyable to others. Even though I'm relating this to anime, I don't think it necessarily has to do with animation. I feel it traces further into the depths of humor. Back to something known as slapstick comedy.

A boisterous form of comedy marked by chases, collisions, and crude practical jokes.

That explains a lot of the laughs that are brought on by suffering. Then again this is just a definition, it isn't comparable to human opinion.

Therefore I took another approach. I wanted to learn more about the opinions of other's on this topic so I did a little bit of research....and the results were pretty divided.

A few of the numerous comments on questions dealing with gender roles in anime, and physical abuse/slapstick against someone of the opposite rate. (Usually Female against Male.)

"I just love seeing their suffering."

"Its funny most of the time but sometimes its overdone and gets a bit annoying."

"This kind of relation appeared in anime repeatedly...
Why? This is needed to keep the anime continuous. This will be a good idea to keep the relation between the two unstable. If the two become steady, or irrecoverably heartbroken on the contrary, the anime will end."

"...but he doesn't get beat up 1000x by the same girl. Nor does he do insanely amazing things for a girl for years and years on end only to have her keep beating him up and treating him like garbage..."

These were all taken from different sources and people. It's interesting to see that people are divided on the subject at hand.

In my opinion, I feel that yes it's a way to continue the anime, but not a good way. If your only interest in the anime is making it sell then sure go for it. Majority of our population will appreciate it, and it will sell. However, will it well liked by everyone and appreciated? The answer to question might differ based on the actual contents of the series.

I feel that the beating, bullying, or any form of attack on someone isn't really good. Sure, in fighting anime I can understand violence. That's the point of the show to be violent, but in the realm of slice of life where Tsunderes roam free, and male main characters are subject to their conflicting words and actions and abuse, it isn't okay. I'm not saying that males are the victims, they're just subject to this kind of treatment more often. 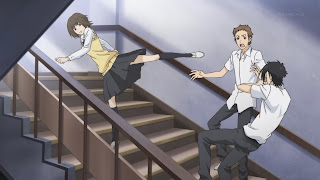 I don't think it's funny anymore, and for me it was never really hilarious from the start. Regardless of the gender or circumstances, it's just not okay. Male on female violence is already considered wrong, but the reverse should be grouped in the same category.

"Guys are tough so they can take it!" What kind of thinking is that? We're not in the past anymore where gender decided your life. We're in the 21st century, where we (attempt to) promote equality.

It's a double-standard, it's something that's carried through tradition and history, but that doesn't mean we have to accept that. Just because anime is not generally directed at the western audience doesn't mean we shouldn't care. By letting things slide by, we allow more to continue. While we may be a small fraction of viewers compared to the Asian audience, our voice still counts.

I feel we deserve better than the generic "girl hits male, male does nothing, but creates comic relief." We should have more diverse characters than the violent and conflicting tsundere. We deserve more intelligent humor than the simple-minded slapstick. We deserve change.
Anime Editorial Fiction Thoughts Tsundere