Anime versus Manga: A Quick Comparison 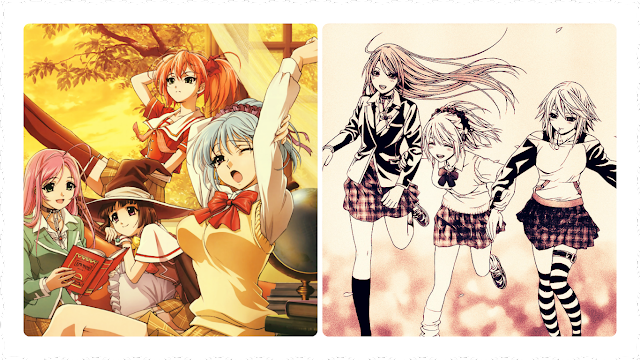 When picking up a series, most fans usually have a decision to make;watch the anime, read the manga, or perhaps both. In some cases, the two are exactly alike. They feature the same plot, same characters, and the same story elements, with the difference being the medium. For more unique situations, the anime and manga can be completely different and offer a new perspective to the general story line.

With this in mind, we might then ask, what makes a manga worth reading and what makes an anime worth watching? What makes one more preferable over the other? Could we go as far to say that one medium is better than the other? Today, we'll take a look at both, and decide whether this is true or not.

So the very first thing to do is to see what they have to offer. While there are many similarities (such as telling a story, introducing decent art, and more) there are also numerous differences.


Comparison Between the Two

One of the biggest reasons why I love reading manga is the fact that it offers comments from the creator. Now this isn't present in every manga, but it's quite interesting to see side entries pop up during manga chapters stating the writer's feelings and trials when creating the manga. Not only this, but it makes me feel even better when I purchase the manga because it lets me support them as well! (Although I understand that this is quite difficult depending on the series/person.)

On top of this, the manga is usually the starting point or the original work. Have you ever witnessed an anime then gone on to the manga just to realize how different it is? What about reading a manga then grimacing at how much is removed in the actual anime? For me, I know both cases all too well. There are times when changes are good, but there are other times when the original is more appealing.

The third positive aspect is a big benefit for me and many others; reading speed. The main reason why I don't watch as much anime anymore, is that there's little time in my day for it. The same goes for many others who work a full time job or who are students. Thus, reading is a bit more convenient because were not limited to 24 minute episodes or other fixed intervals.

Another big aspect is that manga is somewhat limited in it's means and resources, however this places power in the audience's shoes. We have to create the voices, the music, the atmosphere, and mostly everything aside from the story and visuals. There's a lot more imagination involved and I love that!

Lastly, manga tends to offer a completely different side of the story. We are either allowed to see things in perspectives that we normally wouldn't view in anime, or we're given more time and ease to view them. The story may be nearly-identical to it's anime version, but there's no doubt that differences will exist somewhere or another.

On the other hand, anime has quite to offer as well. One thing manga can't match is the liveliness of anime. Although characters usually have great stories and amazing personalities, anime really flushes these out and brings them alive. Without anime, I believe such characters wouldn't feel as real or as human as we are.

As an aid to this cause; voice, music, and SFX play a heavy role in the liveliness of anime. Manga readers unfortunately get the short end of the stick in this regard, as sfx (sound effects) have to be written out in the manga world. Anime openings and endings also have a tendency to get stuck in the heads of viewers and the simple melody of them can easily remind a fan of their favorite anime moments.

We can continue to connect the dots, as these aspects allow for further characterization and development of the characters. Nowadays a voice can make or break a character. It can guide viewers and act as a foil to their personality. On the other side, it can misguide us and make us a believe character is something they really aren't. The main thing is that it's much harder to achieve this effect in written form.

What good is anime if it can't be accessed? One of the greatest things about anime is that it's becoming more wide-spread, and may be even more so than it's written counterpart, manga. Many legal streaming websites have arisen, and subs are now available in multiple languages. The same is becoming true for manga, but from my own experience I have seen this more on anime's side.

The last trait is one that both share, but pull off in different ways. Anime also provides the audience with a different side of the story. There are cases where anime delves from the original plot, or doesn't make use of the original plot at all. What matters is that we're getting and different view that we wouldn't have had before.

After examining both sides, I believe that neither medium is better. Both are necessary and both bring things to the table that the other one doesn't have. However, I feel a bit more partial to manga, just because it happens to keep my attention and allows me to enjoy more series.

Anyone who knows me and has been reading this blog probably has heard that I struggle with watching many anime. On the flip side, with manga I can easily finish a series in a day if I enjoy it.

I believe as long as anime or manga doesn't lose that touch, they will continue to be successful.

Thus, I turn this post over to you my readers. What medium do you prefer more, anime or manga? For what reason? Do you believe one or the other is better, or are both needed? If you have time, feel free to comment below!

Thank you for reading~