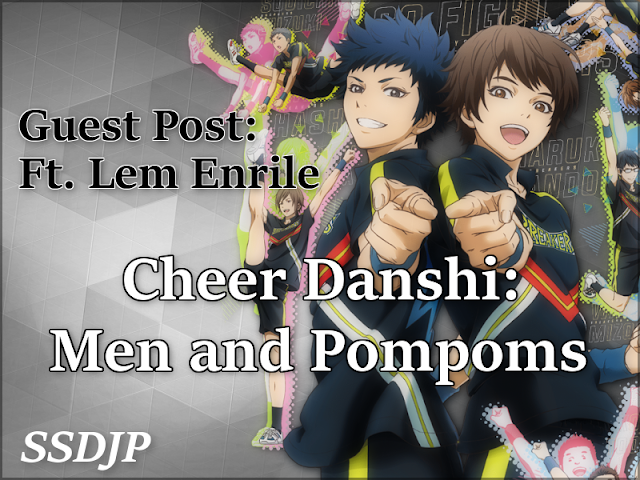 Have you seen a live cheer dance performance before? I know most of you have. Even if you are not so fond of it just because your friend dragged you to watch one, I’m sure that you’ll be amazed with the cheerleaders’ performance. Most often, you would see girls being thrown high up in the air as if they are flying, and then they would graciously land on their feet while wearing a goddess smile.

For a very long time now, girls have dominated the cheerleading world. Admit it. When you hear the word cheer dance, you would immediately think of girls with tight-fitted clothes and short skirts, armed with frilly pompoms. Or if there are guys on the team, they are usually the ones who lift and support the girls while performing their stunts.

If you are a fan of cheer dance, then you would probably like the anime, Cheer Danshi. However, Cheer Danshi has a different take on cheerleading – its members are all men, specifically, college guys. And these two young men here are the main protagonists:


I know some of you will feel disgusted, thinking that an all-boys cheerleading group is gay. In fact, Cheer Danshi has been listed in Goboiano’s 15 most dropped summer 2016 anime – which is really sad. At first, I also had plans to drop this anime because it’s summary is just so… not that exciting.

But I promised to myself that before I drop an anime series this summer season, I should watch episode one first at least, because there are many times that I have dropped an anime due to its poorly written summary only to find out later that it is actually good.

Maybe these 333 people didn’t realize Cheer Danshi’s awesomeness, or didn’t even bother to watch its first episode. However, your stereotypical view on cheerleading might change, especially if you start watching this anime.

Now, let me start giving you the good points why Cheer Danshi is worth watching.


In this anime series, Cheer Danshi emphasizes that cheerleaders do not always have to be girls, that even guys can rival the girls’ cheer dance moves.

If you got the moves or even if you don’t, Cheer Danshi makes it clear that as long as you are determined to learn or want to try something new for yourself, it is never wrong to try and do your very best. So if the people around you are discouraging you to pursue what you want, don’t mind them; mind what you want to do.

Sports with balls aren’t only the cool and manly sports.


I think when it comes to coolness and manliness, Cheer Danshi doesn’t fall behind. Cheer dance is a sports for men too! I actually like Cheer Danshi being a nontraditional sports anime. This is in fact a rare find because most sports anime are basketball, tennis, baseball, soccer, or any other sports that involve balls.

If things aren’t working out, it’s okay to quit.


Most anime series teach us to “Try our hardest” but Cheer Danshi also understands that it’s okay to let go of your passion when you have already reached your limit. Haru was once a member of the judo club but because he was not delivering any results, he decided to quit. And later on joined the cheer dance club.

I know most younger anime fans live by this quote “Never give up.” But sometimes, holding on gives yourself more damage whether it’s love or dreams. If you quit at something, I think it is not actually that bad. When you quit, you are just giving yourself a favor of opening up a new chapter in your life. And you’ll understand this more once you became an adult.


A lot of people think that a cheer dance performance is only for entertainment. That it's just fun and exciting to watch. However, Cheer Danshi isn't only about entertainment and fun.

Honestly, a chord was struck in my heart when Kazu told his reasons for building the cheer dance club. Aside from looking up to his parents who were both once cheerleaders, Kazu revives the true purpose and meaning of cheerleading. And that is:

"Becoming a hero by supporting someone else. Gaining the strength to inspire someone to greater heights." 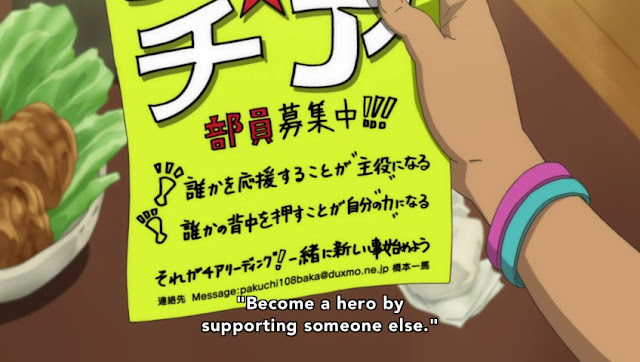 That's it! I hope you consider adding Cheer Danshi on your watchlist. Have you already started watching this anime? What are your views about it? Let me know in the comment box.


Lem Enrile is a freelance writer whose hobbies are watching anime, reading manga, and taking photos of her three lovely cats. Follow her on Twitter.
Anime cheer danshi Summer 2016