Anime Fans Need to be Aware of the World 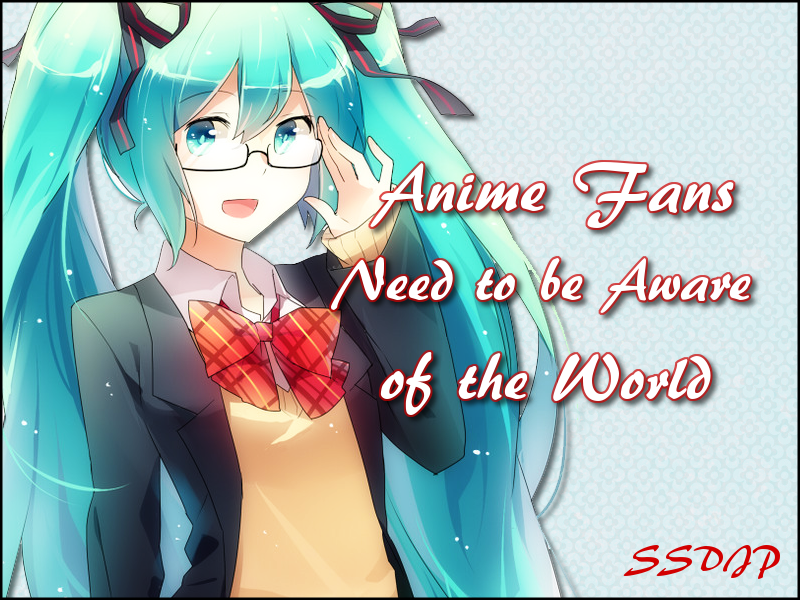 As otaku or anime-viewers, we tend to indulge in the worlds of others. It's a pretty common thing when it comes to anime; the series are full of complex plots, and the characters are relatable to boot. Of course we take this love to the outside by purchasing various merchandise and showcasing our interests through apparel. I know many people like me who love letting people know they love anime!

However, times are changing in the world. People are being put into important positions, which leads to massive changes of the world structure. Our earth is forever changing which of course has an effect on the things we partake in, such as anime.

In America, we've just witnessed the election of a new president. Before now, America has been the leader of the world. Many countries turn to us for guidance and assistance. Therefore what happens in America has an effect on the world. This includes our interactions with other countries, such as Japan.

With this in mind, we otaku need to be careful with the people who control our country. We've dealt with numerous government issues before that had the potential to harm anime, like SOPA as an example. SOPA was an act that would hurt anime fan sites, and would have made watching anime difficult for the common person. Luckily this bill was stopped. Others such as trade agreements may cause harm in the near future.

Even outside of America, other countries have power to influence anime through things like censorship or lack of importation. There are cases where the citizens have little to no power, but there are situations where people in charge of these things are willing elected into power. The actions of little can change the lives of many.


Although politics or economics may not be as interesting to anime watchers, they are important. They are also things that change our lives. So, if something is having an effect on the world I think it's natural to want to play some part in it.

Imports from Japan may become sparse and more expensive. Anime-viewing sites may go down, and we may see less anime on television. Communities may become less accepting of otaku. The good part is that there's always something that we can do to make things better.

Right now, I think it's important to gather knowledge on the world and to promote a global mindset. Even more importantly, we need to express what we love and promote positive change to our communities and fandom.  Even if it's something small like writing a blog post or making a YouTube video, we each can do something to make the world better for us otaku, and everyone else! This won't happen unless we actually pay attention to what's going on and educate ourselves.

Therefore, I believe that we need to be aware of the world we live in. If we love anime, Japan, and all that comes with it, we need to make our best efforts to keep things positive!


Thank you for reading~