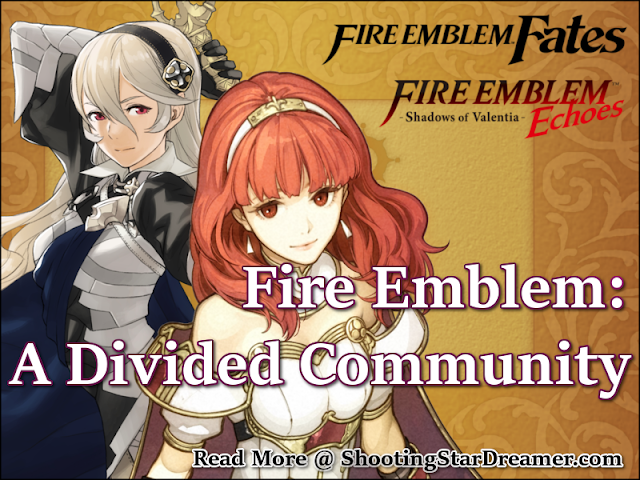 Out of all the current titles featured on Nintendo devices, Fire Emblem has caught the attention of many at this time. With the release of Fire Emblem Heroes for mobile devices and the launch of Fire Emblem Echoes for the 3DS, the series is better than ever. However, with the addition of various new mechanics and characters, the games have been well-received or disregarded depending on who you talk to. It all boils down to an old vs new debate with Fire Emblem, which has led to a clear divide in the community.

When it comes to creating a video game, there are many factors that are required. Gameplay elements, graphics and sound, character development, and similar aspects. Although technical details are important, nothing can beat a clear understanding of the consumer. (This is especially true in a multiplayer environment, as the consumers are a part of the gameplay!) Yet, this can become convoluted when your consumers want different things.

Since the game series may not be well known to everyone, here's a quick explanation. The Fire Emblem Series are tactical role-playing games with an emphasis on character interactions and compelling stories. These interactions are known as supports, which occur between two characters as they fight together in numerous battles. In the past they were a bit more limited, while newer games allowed players to marry these characters as they willed. Alongside this were player-insert characters which can be customized and married to a character of the player's pleasing. This started with opposite gender relations but extended to same-sex relationships as well.

The new marriage system appealed to the waifu culture (discussed here), which led to concerns among certain parts of the community. Alongside this were the new character designs which played to a few popular anime tropes. Although the newer games, Fire Emblem: Awakening and Fire Emblem Fates, received criticism, they ultimately revived the series from its mediocre performance in the West.

This led to the divide between the newer and older fans of the games. The people who have been with the series from the beginning dislike the appeal to the "otaku culture", while newcomers embrace it and pin the late games in the series to the recent success. It's definitely not all black and white though.

Thus the result is a tug-of-war between the fans which has torn the community in two. If you take a look at many Fire Emblem forums, or in the comments of YouTube videos you'll see people complaining about the otaku aspects of the game and others ranting about "Fire Emblem Elitists." (Aka the oldies.)

In my opinion, I lean a bit more towards the newcomer side of this community. I started playing Fire Emblem games when they were on the GameCube which was about ten years ago. Even though I definitely enjoyed the older games, I was entranced by newer entries as well.

I feel like Awakening and Fates were good games because they appealed to what consumers wanted, something that I mentioned earlier in this post. I wouldn't say that they were selling themselves out, but keeping up with modern times and trying a new formula. The change was good, maintaining the old Fire Emblem elements with new features to pull in a wider crowd of people.

I would rather see Fire Emblem continue the pattern of combining new mechanics (such as marriage and children) with the aspects that made the game lovable from the beginning. I also like that Fire Emblem Echoes is an attempt to reintroduce the history to the new generation and is a treat to the original fans. Still, I feel that including the new features would have been an interesting choice as well though.

At this point it'll be interesting to see how Nintendo and Intelligent Systems will shape the franchise. Will they appeal to one side of the community or try to make ends meet? I'm definitely hoping for the latter since I believe that would be a win-win situation. I feel this could be done by following the trend of remakes while releasing more games with the new mechanics and changes.

Of course, I also want to hear from my readers. What do you all think? Are you happy with the Fire Emblem community? Do you even play Fire Emblem, and if not what are your thoughts on the games? Do you believe appealing to otaku culture is a good or a bad thing?