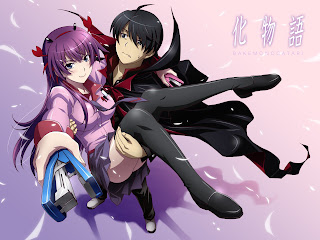 I'm taking a little break from Suisei no Gargantia for the time being. Instead I'd like to focus on another anime by the name of Bakemonogatari. From what I've heard about the series, it is one of the best animes of it's time, receiving praise from numerous fans. Let's take a little look at the description from our friend Myanimelist.

"The story centers on Koyomi Araragi, a third year high school student who has recently survived a vampire attack, and finds himself mixed up with all kinds of apparitions: gods, ghosts, myths, and spirits." 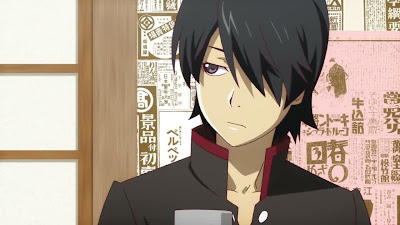 So here we have our protagonist Koyomi Araragi. He's a rather interesting character, yet he still shares traits of the generic hero. For example his constant want to help others reflects this. Although, in my opinion he stands out more than other characters in the series. Why? Well I'll go into detail about that later. 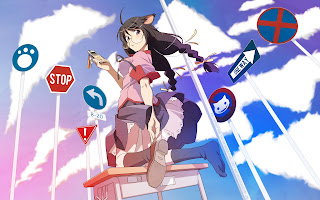 My first impression on the first episode of the series, was utter confusion. I had no clue what was going on from the first episode, and nothing seemed to make sense. The anime starts off in a dim scenery, and we just see a brief conversations between two classmates, Araragi and Hanekawa. Shortly after, we skip to Araragi encountering a girl by the name of Senjougahara. They converse a bit, about who knows what and staples Araragi out of nowhere. However, Araragi easily recovers from the wound due to his ability to heal from fatal wounds. The story progress from there on. 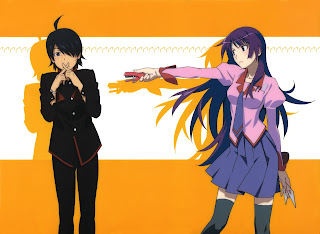 When I first watched the anime, I was assuming that this was just temporary; I didn't expect the story to continue on this path. Yet to my disappointment it did. In between the major points of each episode there are sections ranging from miniscule conversations to witty jokes and puns. However the conversations are not even fully done in terms of artwork, they range from still shots of the character in certain unflattering ways, to blank scenes and objects that have nothing to do with what's going on. I understand the anime's want to instill the fact that there was a certain meaning in these techniques, but in my opinion they are overused. Sure, having something like that once in a while would be fine, but throughout the whole series? I feel that doesn't not make the series different or unique, but just redundant.

While watching I tried to relate and like the characters, but it was hard for me to do so. We have a wide range of girls, who fulfill the generic stereotypes; the mischievous loli, innocent loli, tsundere, sporty girl, intelligent glasses wearing girl. I feel that these characters could have been written better. Araragi is unique to me due to his way of going about things, he's a vampire, but refrains from using violence. He's a nice guy, but still has a sense of perversion. He's not the perfect person, he still has flaws. 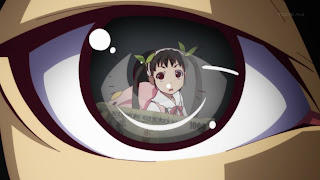 The series worsened towards the end, as Nadeko's character arc felt rushed and incomplete, and was less fulfilling as the previous ones. The ending was okay, but I was somewhat left with a bittersweet feeling, as if I was slightly happy for it to end, and was emotionally unattached to the characters.

The weird camera angles and odd objects made my head hurt. Araragi's constant beatings present throughout the whole anime were  big turnoffs, especially when they became gory and heavily animated. Not only this, the fact that he wouldn't fight back was also pretty annoying.

To sum things up, while the anime was going for eccentricity and such, I feel it tried too hard. Not only that, it tried to cover up it's flaws with the unusualness. I can understand how people would like the anime, however I'm not one of those people. In my opinion, it wasn't a good anime. It has appeal and is liked, but I don't think it should be considered good. It's just average, as there's a lot that could be improved. I really wanted to like the series, and I tried to enjoy it, but it just didn't click with me like others do.