With the immense popularity of Splatoon behind us, the sequel is off to a similar start. Although the game hasn't officially released, players have gotten a taste of what's in store through various previews. What's most interesting to me though, are the fan's responses to the new musical characters: Pearl and Marina. Although both characters are loved, I'd like to focus on Marina; specifically because she's drawn the most attention out of the two.


Marina At a Glance

In the game of Splatoon, Marina is a creature known as an Octoling. She differs greatly from the usual squid-kid characters called Inklings. She has octopus tentacles for hair and slightly different facial features. The reason why her inclusion is so shocking to players is because the Inklings and Octolings were pretty much enemies in the previous game. It's odd for her to appear and be welcomed into their civilization.

Marina is also described as being a "reserved" character. She appears to have trouble interacting with others (outside of her partner Pearl) and is depicted with nervous looks at all times. In her duet's with Pearl she sings mostly the background vocals while Pearl covers the main parts, representing aspects of their personality.

What Contributes to Popularity

When something becomes popular, there's usually some sort of reasoning behind it. The popular anime of the time usually bring something new to the table like One Punch Man, while others take old tropes and change them up like Madoka. Regardless of the way it's done, popularity usually connects to freshness.

I believe the newness of Marina is part of the reason why she's a fan-favorite already. Since Nintendo players got a hold of Splatoon, there's been one thing missing from the game: Octolings that are allies instead of enemies. Many begged for these characters to be playable and some preferred them over the Inklings.

Although we still don't have playable Octolings, Marina is a step towards this becoming a possibility, which also hints that Nintendo is listening to it's fan base. I definitely believe there are more changes to come in the near future!

Connection to the Audience 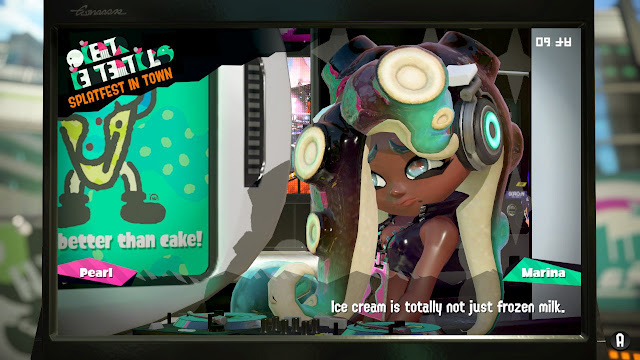 Introducing something new is usually not enough; people have to find some sort of relatability as well. There are times when characters are designed to be one-dimensional or perfect. They either embody a single trope or become an all-around character that has no flaws. When it comes to character design it's hard to find a compromise.

With Marina, her personality is definitely something people can relate to. To put it bluntly, Marina appears to suffer from anxiety or social anxiety. This explains the fact that she always appears to be a bit nervous and perhaps ditsy at times; interacting with others definitely gives her trouble.

This type of issue is actually a common problem for many, and seeing a character who goes through similar struggles is motivating in a way. The fact that Marina continues to perform and follow her dreams while dealing with these issues is definitely inspirational.

With the previous two points in mind, we have to remember that our world is diverse. Although the communities differ depending on your location, our world is a colorful one. We don't all look the same, and we're not all sharing a single personality as well.

Marina breaks the original barriers of Splatoon by being a different race than the usual cast. On top of this, she also has a darker-skin tone which is quite different from other NPCs. The most fascinating thing is that people tend to take a liking to her because she's so different.

Therefore, I believe this has a relation to her popularity. It overlaps with her Octopus race origins, but the previous Octolings we've seen have all shared the same skin color. It's nice to embrace our differences as something beautiful.

So, there you have it! I believe from the get go, Marina was going to burst with popularity due to her character design. She brings so much new to the table and embraces a lot of things we haven't seen as much in Splatoon. I think the developers definitely made a smart decision by including her in Splatoon 2.

What do you all like about Marina? Why do you believe she's popular? Can you relate to her? I'd love to hear your thoughts below, so don't hesitate to comment!