When we watch anime, common tropes are almost always used. The slice of life genre especially contains the same high school setting with the average protagonist. Of course, they're not carbon copies; they mix in new elements to change things up, but the formula is the same. Yet we don't ever get to see different settings, new experiences, and changes. Taking a chance at a new story is risky, but this kind of alternative experience is much needed. This is where anime such as Boku dake ga Inai Machi or ERASED, come into play.

ERASED tells a story about a unique individual and the mystery surrounds the world around him.  The main character is Satoru Fujinuma. He's somewhat of the average protagonist, but he's older at the ripe age of 29. His life isn't exactly going as planned, as he struggles to hit it big as a manga artist. The only benefit he has is that he has the ability to repeat certain events, going back in time to stop catastrophes. 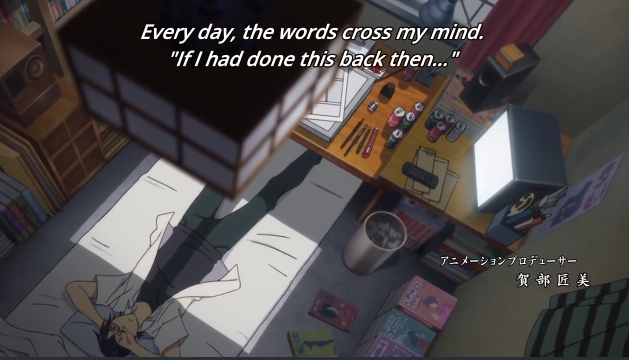 From the beginning I thought that the series would revolve completely around his powers, featuring everyday situations and being a small-time superhero. This expectation was completely blown out the water when he gets sent back in time, to solve a murder mystery that happened during his grade school days.

It starts with the murder of his mother, with him being framed as the culprit. Becoming a fugitive and then forced back to the past, he then has to relive this point of his life with an adult mindset and a newfound drive to stop the murders. 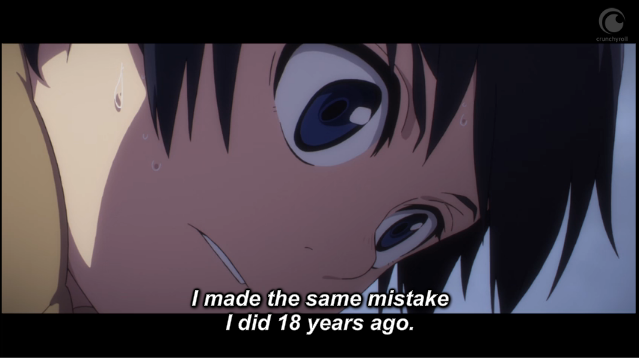 Although we may not get the chance to redo our past, we can learn from it. In ERASED Satoru is literally given a second chance at life to fix his mistakes and solve mysteries. While he may be changing the past, ultimately he is changing the future.

This I believe is a metaphor for how we as humans make mistakes in life, but need to reexamine them to do better in the future. The things that Satoru experienced in life, are things that we all deal with. Changing oneself to fit into the crowd, avoiding risks, and not believing that we are control of our lives and ourselves are common problems. For Satoru, it took him 29 years and a little outside help to realize this, but for everyone else, it's a change we can make now.

This moral is shown as Satoru relives grade school, discovering that a student in his class is the first victim. Her name is Kayo Hinazuki, the girl in school who keeps to herself and comes from an abusive household. She is linked to Satoru's past life. As a child, our protagonist wanted to make an effort and talk to her, but could never bring himself to. This time, he decides to interact with her, becoming close friends and forming an even child-like romantic relationship. Although he improves her life and tries his best to save the girl from abuse and murder, he is ultimately unsuccessful. 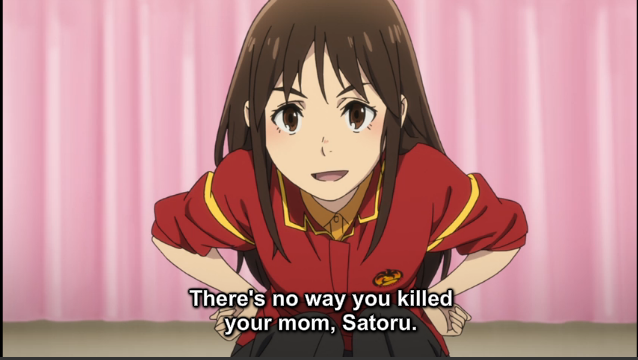 He again is forcibly time-warped to the future, back to his unfavorable predicament. He is saved and sheltered by his co-worker, Airi Katagari, the girl who is linked to his future life. When things seem bleak he takes the time travel into his own hands and gets sent back to the past once again.

Beforehand, Satoru mostly tried to go at life alone. He corrects his mistakes of the past but finds it hard to cover all bases, especially in stopping the murder, by himself. He learned from his errors but also learns that he cannot do everything alone.

By taking influences from both the past and future, we learn that both are important, and getting too caught up in either can be detrimental. A very large lesson that is also shown is that life is a lot harder when you work alone, so finding trustworthy companions is the way to success. In Satoru's third chance in the past, he learns from this and puts his faith in his comrades. The rest is history. 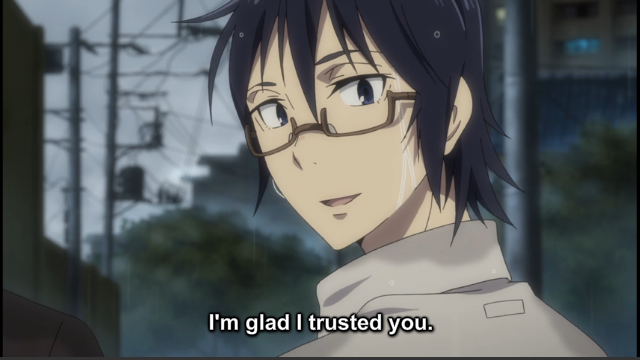 ERASED may focus on the magic powers and seem unrealistic, yet it touches on very real topics. In reality, humans may not be able to relive their younger days and fix every single thing they've done wrong. However, this is not the point of the series.

I believe the message is that change happens when you believe in yourself and the control of your destiny. When you're willing to have this kind of mindset, nothing can stop you, at least not forever. This means pulling yourself up from a hopeless situation and moving forward. In a sense, you can create your own second chances, similarly to how Satoru did.

This anime is chock full of things to write about that I can't fit them all into one post, but if you'd like to hear more about ERASED, please let me know! I'd definitely like to recommend the anime to everyone, and more information about it can be found at its MyAnimeList page.