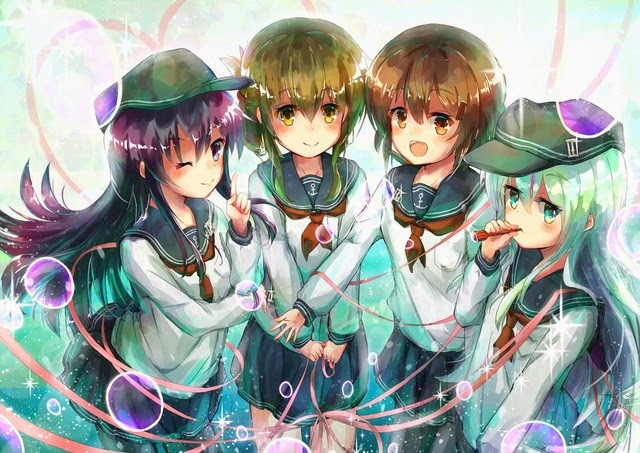 With the release of the new anime, many people are wondering what's all the rage about this series called Kantai Collection. One could relate it's popularity to something like Touhou, a game series featuring many diverse characters. Like Touhou, the catch is that they're all female. So what separates this series from all the others?

Well, there's a lot to talk about when it comes to Kantai Collection, so first I think a brief summary is a great way to explain the concept. Basically, during World War 2, many Japanese ships (and a few German) were used in battle. Kantai Collection (or Kancolle for short.) takes these ships and turns them into a massive cast of anime girls. Each girl is based on a ship, and usually their design takes bits and pieces from the ship's history and aspects. 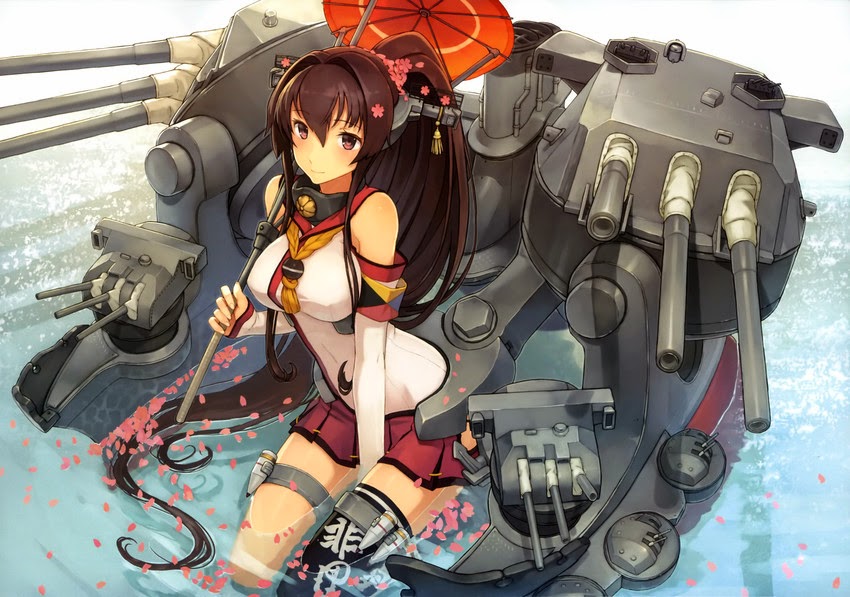 For those who have seen or heard of Strike Witches, it's a similar concept. In Strike Witches, the girls are based on the pilots, and their Striker Units represent the planes. With KanColle, the girls embody the warships, and share the same name. So you might be asking now, what ships are present in KanColle, and what are the properties behind each one?

The first and most vast type, are Destroyers. They're small and fast, but unfortunately not too good at dishing out and taking hits. This isn't true for every single one, but most of them follow this pattern. The girls who embody this type are usually petite and small, usually similar to lolita characters in anime. Similar to Destroyers are Light Cruisers, but a step up. They're a little better than Destroyers when it comes to taking hits and fire power, and are also pretty good at combating submarines. They're represented similarly to Destroyers, but are usually less petite.

Next up are the Battleships. These are probably some of the strongest ship girls, and of course, the most well-known when it comes to the series. If compared to Touhou, they're like your Reimu and Marisa, as almost everyone has seen them at least once in their lives. They have a large amount of firepower, are pretty bulky, but may be very costly. Similar ships consist of Heavy Cruisers, which is somewhat like a Battleship, but smaller, weaker, and less costly.

Then we have a few that stand out from the crowd. These consist of Aircraft Carriers, Submarines, Seaplane Tenders, and other various creations. They vary in strengths, appearances, and purposes, but each one is useful. They usually have a central trend behind their designs. Examples of such are the bow and arrows that Carriers possess and the fact that almost every Submarine girl dons a school swimsuit. 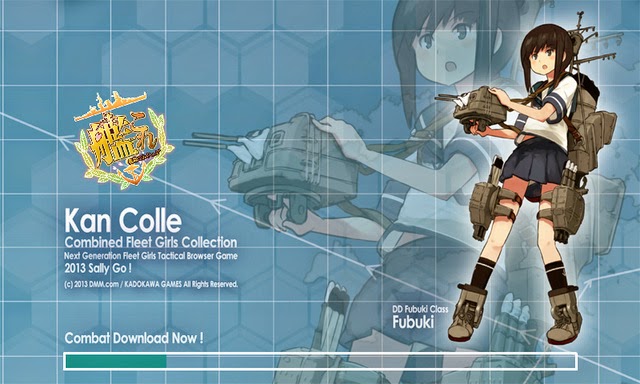 Much of Kantai Collection's success comes from the popular web browser game. The game is only available to the Japanese audience at this time, and requires participation in a lottery just to access the servers. While this stops a lot of people from playing, there are methods that can be used in order to play from any region. I won't discuss it here, but for more information check out the Kancolle Wiki.

Unlike a lot of games, you don't really do any fighting yourself. Instead, you take the role of the admiral and command your ship girls in order to safely complete battles. To be successful, mostly strategy and character setups are important, instead of learning complicated inputs or having a high skill level. The ship's properties also take part in the battle, and carry over to the characters. For instance, Destroyers have low hp and can't hit very hard, while Battleships can handle most enemies with ease but take a lot of resources to maintain.

Of course, since a lot of the game is based on real world activities on naval forces, things like ship construction and repairs are present. When your girls battle and take damage, you have to dock them to repair. This is a simple process, but depending on the condition and level of your ship girl, the amount of time they must stay docked increases. For new admirals, repair times can start at a mere five minutes, but later you may have to wait a full day for a ship to be brand new. Luckily, buckets are an alternative to this, and instantly repair your ship. However, they're a little rare so it's best to stock up on them when you get the chance.

The video below is a great example of basic gameplay, so please take a look as it's very short and will only take a few minutes of your time. Remember to support the uploader!


With repairing, construction, and almost everything else in game requires materials. You start the game with a decent amount, and there are four different types that are used. They consist of fuel, ammo, steel, and bauxite. (Bauxite is usually used for Aircrafts.) These are consumed when you build a ship girl, repair them, restock them, and even for remodeling. The upside is that they regenerate on their own with time, and you can even gain more through quests or expedition.

A daily day in the game consists of completing quests, battling other admiral's fleets, doing missions, building and remodeling ship girls, and more. Although the game is pretty simple once you play for a bit, it's highly addicting and a lot of fun. 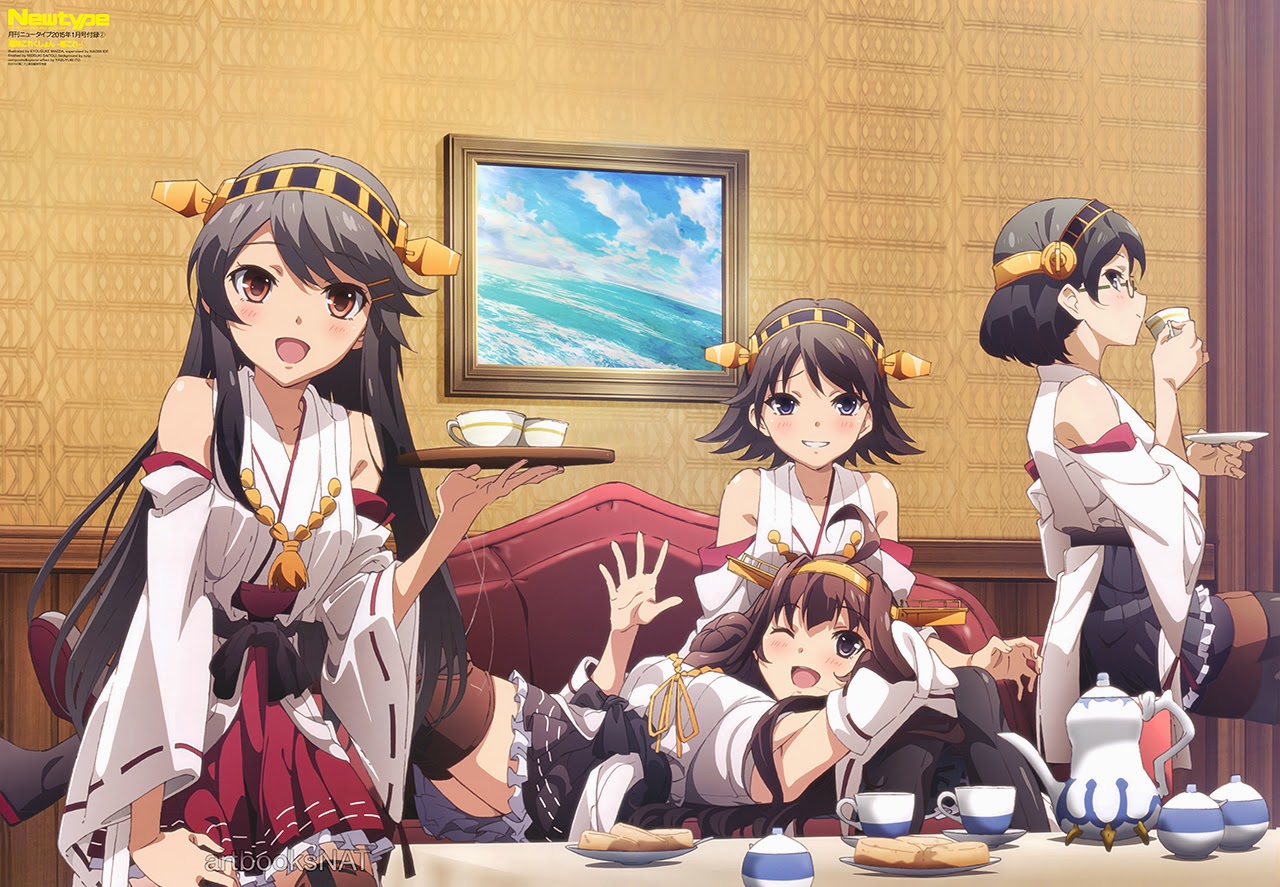 Most recently, Kantai Collection has an anime adaption that brings everyone's favorite characters to the big screen. The anime is a representation of the game and highlights many of the central features, but doesn't go as in-depth. Instead, the anime takes note of jokes and laughs among the fanbase, and puts them into a more visual form, which is really refreshing to see.

In summary, the anime is more for people who know the series well already, and it probably isn't too good of an introduction. It tends to focus mostly on certain characters, and as of now, a few have not even been seen in the anime. Still, for the characters that are present in the series, their personalities and aspects are really explored and fleshed out.

For one, every single character present in the game and anime has a voice. Although some are voiced by the same person, at times it's really hard to tell. A trait that many of the characters have when it comes to voice is that many have a unique verb tick, or catchphrase of their own. Alongside the changing of tone and pitch of voice by the seiyuu, certain traits set the characters apart from each other. If anything, the presence of a voice make the characters seem more diverse than they really are.

Other such traits that separate the cast are appearances. Although some members of the cast may look somewhat similar due to being sisters, almost each one has a distinct look of their own. We also have a wide cast of roles the girls end up playing, such as an idol girl, ninjas, and a couple that tend to resemble a few K-On! characters. No matter who you are, there is a character for everyone.

Similar to Touhou, many fans have created songs and music related to the characters, such as the one below.  This one is a play on the Destroyer, Inazuma's famous catchphrase "nanodesu."


Hopefully this covers a lot of the general questions regarding Kantai Collection, and makes it a lot easier to understand. As a recommendation, most people should start with the game first if they have the opportunity to play, in order to get a grasp on the series and characters. Once you've done that, watching the anime might be the next best thing to do. If you don't like one or the other, it's okay, because both are a good representation of the series. So you don't necessarily have to watch the anime or play the game to enjoy it.

With that, thank you for reading! I tend to enjoy the game a bit more myself, because I have more control and interaction with the characters, but the anime is also a good watch! Regardless, hopefully many of you find a ship girl that you like, and find something that you enjoy about this series!