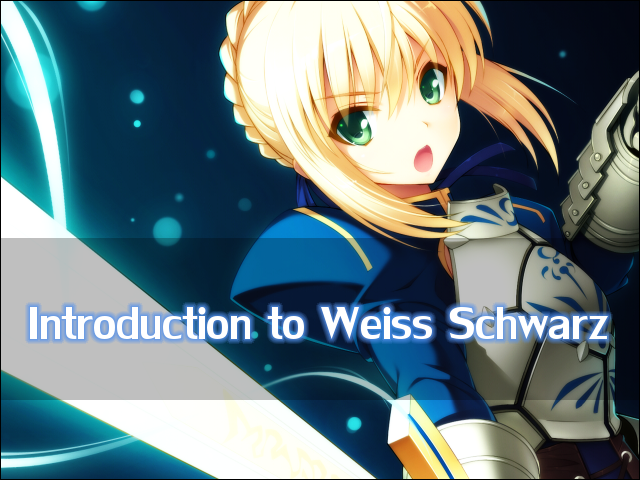 Being an anime fan, it's usually natural to have a couple of series you love more than the others. You can buy merchandise, clothing, and use the characters as your avatar, but what if you want to do something more hands-on than that? Well, that's where Weiss Schwarz comes into play. Not only are trading cards great as a collectible for the avid collector, this Bushiroad sponsored card game allows fans to do battle and clash with their favorite anime. If you love card games and anime, then I recommend reading a bit more into this!

Bushiroad is a company that is known for many things. Recently, Cardfight!! Vanguard has started soaring to new heights, becoming more well-known in areas outside of Japan. Love Live School Idol Project is another successful venture from the company, progressing from a popular anime into a phone-based rhythm game that has over ten million players.

The next project to bloom is Weiss Schwarz, an anime based card game. Weiss Schwarz, which means White Black in German, brings together anime that fit into two types. The Weiss side consists of calmer anime such as slice of life and romance genres such as Nisekoi, while Schwarz features action packed series like Kill la Kill. Although they are divided into two groups, the basic game play remains the same among each.

So how do you start playing, and where should you begin? First, a basic explanation of the game is needed in order to go further. Weiss Schwarz consists of two-players with a deck of 50 cards taking turns attacking each other. Unlike games such as Yugioh, you do not have life points. The counter for damage is known as the Clock, a rectangular portion of the field which holds up to 6 cards at a time.

The field looks complicated at first, but upon closer examination it is a simple system. As we have already addressed the clock, the other sections include the deck zone, waiting room, stock zone, front/center stage, and back stage. Other areas are the level zone, climax zone, and memory. Above is a quick explanation of each.

Now that the field is covered, we can move onto deck composition. A deck has 50 cards, and allows 4 of a single card at max. There are Level 0, 1, 2, and 3 cards. Each level is relative to the level of the counter and can only be played when the counter is equal or higher than that cards level. For instance, you cannot play a Level 2 card at Level 1 counter, but you can play a Level 2 card at Level 3.

Aside from these grades, we have climax cards which consist of special effects. They usually are taken from important events in an anime and are designed in landscape/horizontal style. Next are backups and counters which are similar to cards like Honest in Yugioh and defenders in Vanguard. They add power to your card that's being attacked and can protect it from being defeated. Lastly, we have other event cards which have special effects at a cost of stock.

Now you might ask how is damage calculated. Basically, each character card that exists in Weiss Schwarz has at least one soul. Soul is equal to the amount of damage you do to your opponent. Depending on how you attack, you will do more damage. Front attacking allows you to do full damage to your opponent and defeat your opponents character if your power is greater, while side attacking does damage without any power calculations.

For actual game play, its hard to explain without seeing it in action. I learned from the help of a tutorial video and playing, so in order to wrap up my short explanation of the game, I will attach a more detailed video that goes into depth and actually shows real footage. Please view the video (if it doesn't show for you please click this link) below if you have the time! 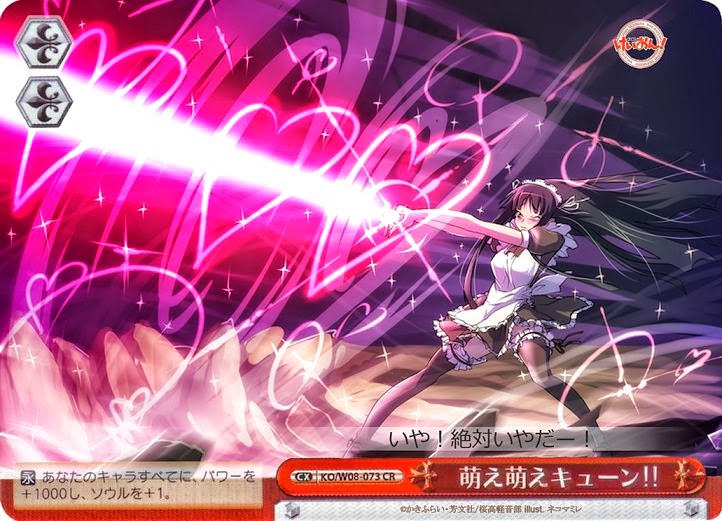 There are many different ways to build a good deck when it comes to Weiss Schwarz, and although it is a good idea to take a look at guides, there is no clear-cut formula that is the best. However, one of my favorite resources to use is the beginner deck building guide here.

Outside of that, buying cards is where the fun begins. Like most card games, a good sum of money needs to be spent in order to get a really good competitive deck. However, in a way this is sort of an investment because you have the potential to get that money back by obtaining rare cards and getting rid of what you don't need.

In Vanguard we have SP cards which possess different art or text, and in Pokemon there are Level EX cards which sport powerful effects and are the boss cards of many decks. For Weiss Schwarz, while we have rare and shiny cards, the most valuable and desired are cards signed by the character's seiyuu. These cards can run from 30 dollars at the least, and 150-200 at the most. 150 dollars is more than double the price of a booster box, which can run around 60-80 dollars. 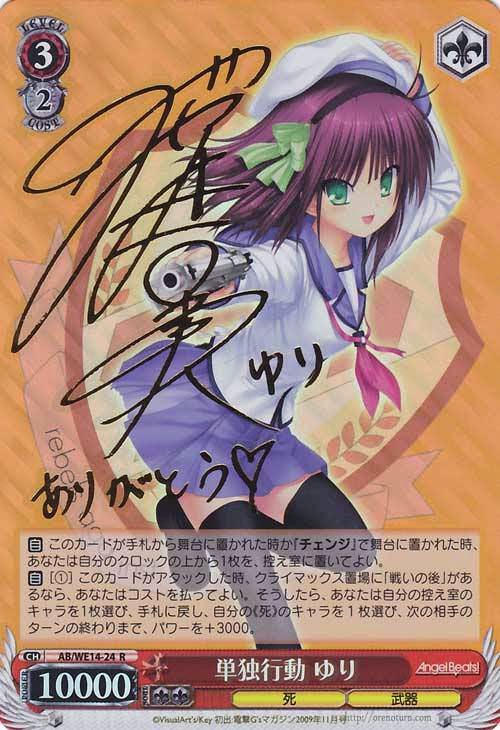 So if you pull a signed card that is valuable, or cards that are well sought after, it's the same as getting the other cards for free. Now all of this might seem like common sense for an avid card player, but for a beginner this can sound a little confusing. So for the newbies here, here are your options in terms of buying cards to start your Weiss Schwarz adventure. 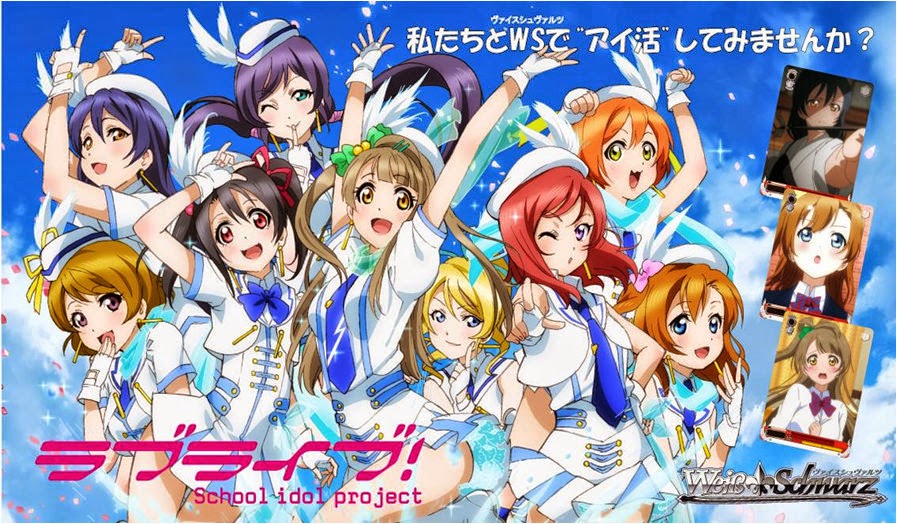 One of the greatest things about Weiss Schwarz is the fact that many decks play based on their anime. Angel Beats makes use of the memory function, Kill la Kill boosts their power and relies less on technique, and Project Diva plays from its songs. The soul of the anime is present in the cards.

Since Weiss Schwarz is such a a game, the main question is one that pops up very often. "Does my favorite anime have a deck?" For most people, the answer will be a definitely yes, but for others, the answer is a fleeting maybe.

Complete List of Anime in Weiss Schwarz (English and Japanese)

Even if your anime isn't present in Weiss Schwarz at the time, its highly possible that it will be added at a later date. The most important thing right now is to spread awareness for the game with the series that are currently part of it. Although the game pulls from many different communities it hasn't gotten as far as say Yugioh or Pokemon. Even Cardfight!! Vanguard may have more popularity and power behind its name than Weiss at this time.

If we want the game to flourish, it's partly up to the company, Bushiroad. The rest is up to us, the community. We are the brand for the game and need to represent it well. A blog post like mine is just a way of spreading the word. If we want to make the game to be one that gets respect, we'll have to keep working to that goal.

With that being said, this is the end of the Introduction to Weiss Schwarz. After this, I'll post a few resources to help new players get started. As always, thank you all for reading!