The Value of Confidence in Anime 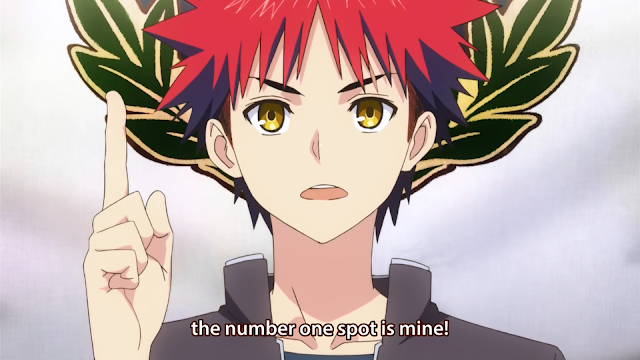 Anime may not always be a clear-cut representation of life, but there are many things we can learn from it. In certain genres, specifically shonens, we see the protagonist faced with a seemingly impossible obstacle to overcome. Somehow the protagonist blasts through the trials thrown at them. Some may call it luck and others may just call it skill, but their success is usually due to a personality trait that's a staple in many successful characters, confidence.

Although confidence can be viewed in many different ways, ultimately it can make or break a person. For one, over-confidence can lead to underestimating others and viewing oneself as all powerful and perfect, and is therefore blinding. On the flip-side, a lack of confidence is even worse than a lack of skills. If you do not believe in yourself or ignore the fact that you can improve, it doesn't matter how skilled you are, you may hold yourself back.

When it comes to anime, we see characters that embody both the positives and negatives of confidence, but overall it is  portrayed as an extremely valuable trait. Instead of going about a normal routine, I decided to take a look at characters from action-oriented anime series and the levels of confidence they possess. 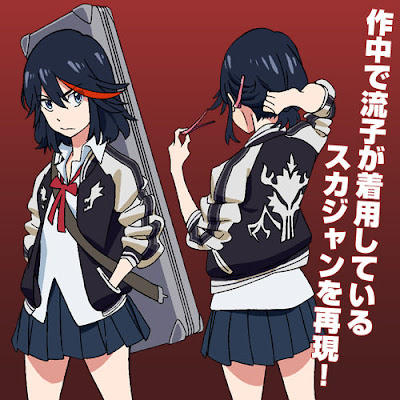 Kill la Kill was a very popular anime. The main character, Ryuuko Matoi, is known for her signature theme song with the opening verse "Don't Lose Your Way!" Although the song is joked upon, the lyrics do a great job of portraying her as a character. For those who haven't heard the song, you can take a listen of Before My Body is Dry via SoundCloud. In my opinion, this song, and the opening portion of Kill la Kill lay the building blocks of Ryuuko's character.

In summary, Matoi is a high school girl, who travels from town to town, searching for her father's killer. The only thing she knows about her father is that her killer used a scissor blade, and that she possesses the other half of it. To this day, she has been unable to locate her father's murderer. That is, until she stumbles upon a towering school run by another important character, Satsuki Kiryuuin.

In the anime, before she enters the school we get an impressive shot of it's gigantic size, along with Ryuuko standing before it, small in comparison. Let's pause and examine this one moment. 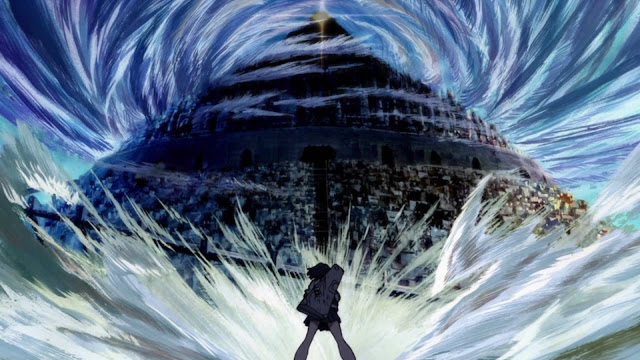 Although it happens in a small frame of time, this scene still stuck in my mind and is one of the most powerful moments from the anime. Not only is the artwork amazing, but we see a perfect display of Ryuuko's undying (and later wavering) confidence. To have the ability to stand upon a civilization and to be outnumbered immensely without feeling fear is an impressive feat. Therefore, I think this moment defined Ryuuko from the beginning, alerting the viewers that she has a firm belief in herself and her path, without fail.

That is...until we continue throughout the rest of the episode. Ryuuko then faces her first foe of the anime, and proves to be no match for him. This fight obviously damages her pride in a way, and shatters her belief of being all powerful. We, the audience, see that she is not going to be a perfect character and that she still has a long way to go. In a sense, this could be another form of confidence, instead this time portraying the girl's overconfidence. She overestimated her abilities and thought that she could easily take on anyone in a fight and win, which had been the case from her background.

With this event taking place, I believe this is where Before My Body is Dry comes into play. Previously Ryuuko took on challenges on her own, walking a lonely path without any help or support. Again, this goes back to being overconfident with her abilities and thus lead to defeat. However, I believe her meeting with Senketsu, the talking school uniform, allows her to regain some of that confidence she had. The verse "Don't Lose Your Way" sums up his role, he is not just a source of power but a friend that can support her. He helps to keep her way intact. Her way is her belief in herself.

Of course, this pattern somewhat continues over the course of the anime, but I feel the first episode is very defining for Ryuuko as a character and builds the road for her progression as a character. I could list numerous examples that occur, but that'd lead to spoiling the anime for many people, and I do not want to do that. So if you enjoyed what you read, please check Kill la Kill out! 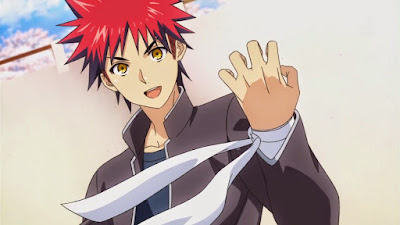 Souma Yukihira, is the main character of a currently ongoing anime, Shokugeki no Souma. Souma is an interesting character, and is actually the main reason behind this post. At first he doesn't seem too different from a normal protagonist, but his balance of confidence along with his attitude really sets him apart from others.

Souma although great, comes from seeminlgy humble beginnings. He mostly spent his childhood days helping his father cook and manage a small diner that they owned. Although he has constantly worked to improve his culinary skills and to someday surpass his father, this dream is cut short when their restaurant closes down. With his father moving to Europe to work, he enrolls Souma in one of the finest culinary schools.

As stated before Souma is really an interesting character. We see a good display of his skill in cooking throughout the majority of the anime. It's also easy to pick up that he's a little clueless or careless with his words. Which caused him to have a few rough relations with those around him. However, one thing I typically noticed is that no matter his outwardly appearances or social banter, he seems to have the best of intentions in mind. He's simply confident, but not overconfident.

For one, we see a good display of his confidence during the entrance ceremony. He casually and clueless states that he doesn't see the academy as more than a stepping stone, and that he'll be number one in no time. Of course, this angers majority of the crowd, which has him start his school career on everyone's bad side.

Still, he doesn't take much notice to this and eventually is accepted by a good circle of friends. He has a few cook offs here and there, but still remains somewhat humble about his skills and appreciates the skills of others. Yes, that can sound somewhat weird, being humble but confident. They may seem like opposites but in order to be level-headed, you need a bit of both.

This is basically what sets Souma apart from many other confident characters in anime; he seems to have his confidence balanced out. He isn't overconfident to the point of misjudging his abilities. For instance, even though he had the guts to challenge others to a cook off, he was still open to learning, training, and improving his abilities. Even though he stands up for himself and his cooking, he still sees his father as inspiration and an obstacle to someday overcome. Although the anime is not over yet, Souma has developed very much so, as we see his humble side throughout the later episodes. 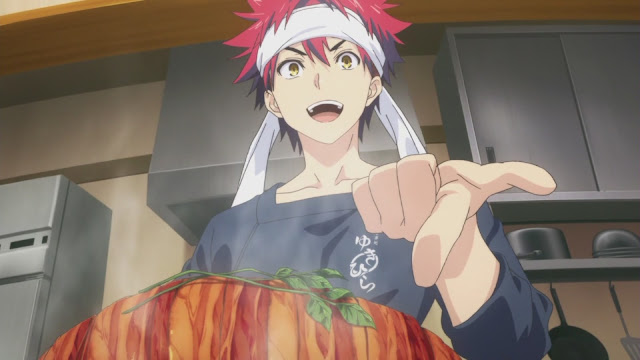 I highly recommend Shokugeki no Souma to anyone who likes shonen, cooking, or wants a nice uplifting and interesting story. There is some ecchi present in the series, but that shouldn't stop you from giving it a try. 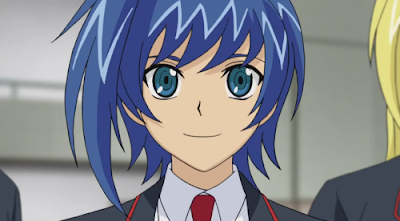 The last member of this post is Aichi Sendou, the main character from Cardfight!! Vanguard. If you've been a follower or avid reader of my blog for a long period of time, you probably have seen Aichi before. He's one of my favorite characters, and I relate to him immensely. Since we've focused on overconfidence and a balanced confidence, let's take a look at lack of confidence shall we?

Unlike other characters, Aichi's past hasn't been all that great. He was constantly bullied due to his small size and timid personality, which led to giving him a somewhat pessimistic view of the world. He felt like this for quite a while until he received a copy of the card, Blaster Blade, from a boy named Kai Toshiki. Kai told him to picture himself becoming big and strong like the warrior.

Moving forward a bit, an older Aichi is still somewhat timid and still bullied by those who have power over him. He still lacks confidence and doesn't believe in his own abilities at all. This changes when his precious card is stolen from him, and thus marks the turning point from Aichi.


Now similarly to the other characters, I believe a certain scene influences and develops him greatly as a character. The Vanguard anime focuses heavily on eyes and eye powers. Certain characters have changed eye shape over time, and others have unique eyes. In the beginning, we see Aichi with timid eyes; unfocused and refusing to look straight towards his destination. When he finally gathers courage and confidence through challenging someone stronger than him, Aichi's eyes seemingly change.

Aichi finally gets the confidence he needs to accomplish his goals, and thus he begins to grow. As the series continues his confidence sometimes wavers, ranging from becoming overconfident to having a lack of confidence. However, most of his successful card fights occurred when he simply believed in himself, even when faced with adversity.

Not only is Aichi subject to this, but the theme behind Vanguard is that believing in oneself or having confidence in oneself, allows you to overcome all obstacles. In a way, Vanguard becomes more of a war of willpower than a simple card game. The characters grow through their fights, and we get to see their strengths and weaknesses. The winner is usually the one who could remain calm, composed, and retain their belief in themselves until the end. 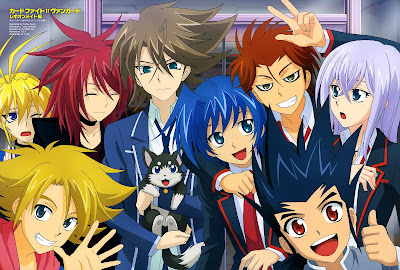 Again, Cardfight!! Vanguard is a wonderful anime and I highly recommend it to anyone who likes card games, but wants something a little bit different as well.

With that being said, confidence is highly valued in anime. Although it comes in different forms and takes place in different ways, there is no doubt that it's a necessity for success in the anime world and our world. Does this mean characters or people without confidence are to be looked down upon? No, I don't think so at all. I believe that everyone has faults and weaknesses, and although these can be improved, we shouldn't demean others for them.

Thus, I would like to thank everyone for reading this post. It's very long, so if you enjoyed it please comment or share it with your friends. Thank you so much for sticking through to the end!