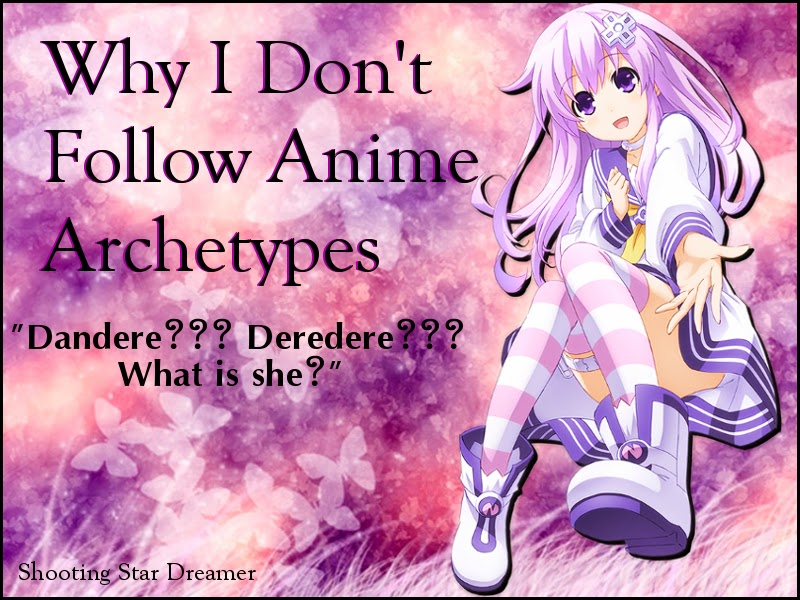 Hello everyone! As a follow up to the last post on the many different types of deres, I'd like to express why I have somewhat of a dislike for labeling characters based on their archetypes. I'd like to agree that some categorization may sometimes be a necessity, because it might be hard to explain the numerous traits of characters in such fine detail, when slapping a label on one is a quick and easy process that is understandable, especially for readers. However, similar to my belief that anime is more than a rating, characters are more than label.

Perhaps I should go into more detail why I  don't believe in this. When a creator writes an anime/manga/gaming character, it's easy to see why we have many typical tsunderes, yanderes, and such floating around. The archetype can be a building block for the characters, a simple way to start if you have no clue what you want to create. With this, a writer can easily take one of those archetypes and change it just a little bit, maybe create a tsundere who lacks red hair, or a yandere who may be crazy, but only to a certain extent. Yet, this doesn't really give the character a uniqueness that makes them stand apart.


On the other side of this issue, I've seen characters who suffer from being too unique. Not that being unique is bad, the fact that they're trying so hard to not be like anyone else can make them hard to relate to. Again this goes back to my comment on why archetypes should be used sometimes, adding another supporting point; not everyone can produce a miracle character from thin air.

So as we examine these different types of characters, and the archetype that is associated with them, it seems like a natural process to put both together and clarify characters just by their outward appearances in personality and lifestyle. Still, anime characters to me hold as much merit as humans, and by judging them and marking them with labels we're treating them the same way we do humans.

Following this, I tend to see calling a character a tsundere the same as branding someone in real life as a nerd. Yes, the subject may have aspects that allow them to fall under this category, but they should not be defined by this definition. The same applies to anime characters; that girl may be a tsundere, but there's more to her character than that. We don't exactly know what the creator was thinking when he or she designed her, or the future development that might take place.(In most cases anyways.)

For this reason I try not to label characters by these. I'm not saying that it's bad to do so, just explaining my reasoning for not doing it.


If anyone else has different views or thoughts I'd love to hear your voice!
Anime Editorial Shooting Star Dreamer Tsundere