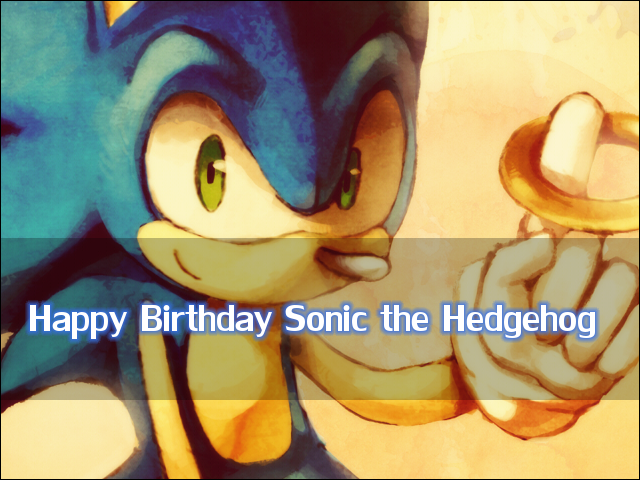 Today is June 23rd, which marks the birthday of our favorite blue blur, Sonic the Hedgehog! Sonic the Hedgehog is known for his huge collection of fast-paced, platforming games, and more-so for being the mascot of Sega. Although Sonic has had his ups and downs, he still holds a special place in the heart of his long-time fans.

There are a few interesting traits about Sonic that make him pretty unique. For one, his ability to run and crazy speeds is his trademark. He's gone faster than the speed of sound at certain points. He also has a fair personality, which leads to him always taking the side of the weaker ones, protecting them and keeping evil at bay. Upon his older incarnations, he is mostly shown with his love of freedom and adventure.

With his birthday being on June 23rd, his astrological sign is Gemini. An air element of the zodiac. This goes hand in hand with his love of freedom and the constant theme of his personality being somewhat like the wind.

With being said, I feel that Sonic is a very important character to me. I grew up among many Nintendo games yes, but Sega always had a major role in a good amount of their consoles. Sonic Adventure and Sonic Adventure 2 were probably my favorite Sonic GameCube games, along with Sonic Heroes which was the icing on the cake. I loved the adrenaline rush that came from his games, and eventually played a good amount of them. Despite ending up with a GameCube over a DreamCast, I have played mostly every Sonic game that has been released, outside of a select few that I haven't tried.

One of the most important things about Sonic is that his personality also reminds me of myself. Like him, I love freedom and adventure, and love to keep the world peaceful. In a way, he has been a role model or icon for me since I was young. His life-long partner Tails, is another character who I relate to a lot as well. Which is probably why I love the color orange quite a bit, along with blue!

So again, happy birthday Sonic! This make 24 years of awesome games, fun times, and chili dogs. Let's hope for even more success in the future!