Do you like Capcom? Maybe you love Namco...? How about Sega? Well, if you're not a fan of these companies then you're out of luck. Project X Zone, is a 3DS game featuring a collaboration between the mentioned gaming companies. While not only featuring decent gameplay, the game combines characters from multiple series. Units work together in paired groups, containing one support  only character.

No, it's nothing like Smash Brothers. Well, sure it does feature fighting elements, but it's more of a turn based strategy game merged with one combo fighter. 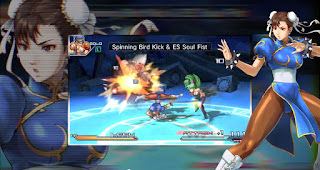 So how do the controls work? While on the field units each have a turn to move, attack, use and collect items. Unlike Fire Emblem, you're not allowed to move each unit when you feel like it. It seemed that the turn order is already decided. Don't worry, the game differing from Fire Emblem is still a good thing. Using and collecting items, opening treasure chests, and other actions do not take up a turn, so feel free to do as much as you want while you can.

Starting the battle phase is a bit different. 2D sprites of your selected unit(s) are on screen, waiting for your command. Depending on the direction pressed during button mashing, combos and actions can be changed. By tapping the L or R button you're able to call in a support or supports at will. Attacking an enemy unit with supports and units combined initiates the Cross Hit, which keeps the enemy from moving during combos.

While gameplay looks complicated, winning is pretty simple. Just keep your units alive and attack enemies until their HP falls to 0. Sadly, during battles you are limited to only a certain amount of attacks, but certain actions allow you to gain an extra attack chance. It also helps to save up meter during battle, using special attacks will easily finish off a normal enemy, or take a big chunk out of their health.It's important to take note that using items, picking up items, and healing allies takes up meter. 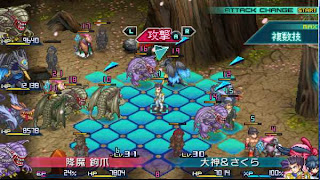 If you're curious to find out if a certain character is included you can find the full character list here. The game features many fan favorites, including Ryu and Chun-Li, (Street Fighter) Jin Kazama, (Tekken) Dante, (Devil May Cry) and more. The characters will retain their Japanese voices in the English release.

The demo is up and available on the 3DS Nintendo Shop, so if you're not sure whether to skip or get this, check it out. 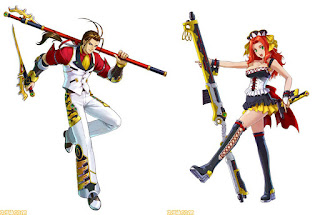 So what is the real attraction you ask? I'd have to say the vast amount of characters and the easy to jump into battle system. At first it seemed really confusing and complex, but after replaying the demo a couple of times I understood most of the gameplay just by experimentation. There addition of a few custom characters is also pretty nice especially if you're bored of the same cast. Also, the story isn't that bad either.

The game is definitely on my "must buy" list.