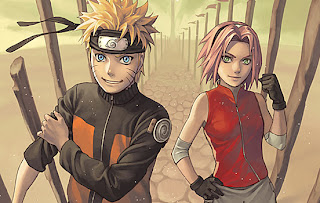 This post contains new footage from the Naruto Shippuden Manga. If you do not wish to be spoiled, stop reading. That is all.

As much as I like Naruto, doing anime reviews just isn't my thing, but the most recent chapter was a bit too interesting to pass up. With a bunch of unexpected events occurring in the manga the last chapter was just as shocking.

We're still in the middle of war. Tobi's true identity has been revealed, and the Kages have been defeated. Tsunade is in two, and things are looking grim. While both sides are losing forces, the ninjas are actually losing living humans, contrary to Tobi and friends who are barely falling short or Zetsu clones.

Sasuke's new resolve has proven to be useful. I'm somewhat thrilled about his change of heart, as he rises up from the depths of darkness. Yet, everything things to be happening so fast, one day he's evil, next he's good; what's going to happen next?

Anyways we get to see the Hokages again. They show up just in time with some new jutsu to seal away the Ten-Tails for the time being. Naruto isn't surprised by their appearance, apparently he sensed them long ago. Later Minato questions if Sakura is Naruto's girlfriend. Naruto somewhat agrees, which of course makes Sakura mad.

Let's switch over and look at the shipping side of this chapter. If you dislike shippings just bear with me, okay?

I wonder what Kishimoto is trying to hint with the similarities of Sakura and Kushina. It seems like he's trying to set up Naruto and Sakura getting together, but what's going to happen now that Sasuke is back? She definitely still has feelings for Sasuke, and then there's Naruto's relationship with Hinata. I think we won't know for sure until this war has ended. 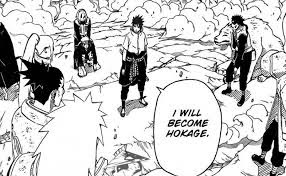 Aside from the shipping stuff, Sasuke finally makes it to the battlefield along with a pretty unexpected announcement. He wants to be Hokage now, regardless of the crimes he's committed. Naruto of course isn't going to let Sasuke take over his dream that easily.

Team 7 stands again to battle the Ten-Tails. With Naruto fully healed and ready to go, Sasuke with his EMS, and Sakura who apparently has something up her sleeve, the next chapter looks interesting.

Now, I feel that Sasuke is going to follow through with his plans to become Hokage. After all Naruto and Sasuke never settled their dispute. I think their next fight will not be to the death, but instead a battle for Hokage.

That's only one possibility. An outcome could occur where they will both take the rule at the same time, similar to the relationship between Hashirama and Tobirama. Later Konohamaru will take the role of 8th Hokage.

Another outcome I can see happening is maybe the death or injury of Naruto. It would be odd to kill off the main character, but Kishimoto probably has something planned if he decides to take it that route. Naruto will then allow Sasuke to take the role of Hokage in his place. For some reason, I doubt this will happen.

The last possible thing I can see occurring is Konohamaru somehow becoming Hokage. Naruto and Sasuke do not survive the war, and Sakura is left as the only member of the trio, similar to the Sannin. (Before Orochimaru was revived) Again, this is pretty unlikely.

We're also left with a bunch of unanswered questions.

Still, the chapter was really good. I wait in anticipation for the next one. Seeing Team 7 again is a nice sight.