Gargantia on the Verdurous Planet (Suisei no Gargantia) Episode 1 Thoughts 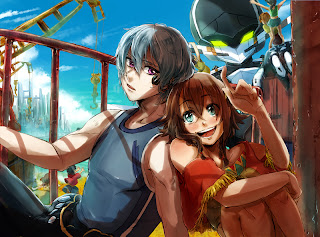 Yes, I'm reviewing an anime. While editorials and spotlights are my pride and joy, I think every now and then it's good to try something new. I initially wanted to review Cardfight!! Vanguard, but with it's 100+ episodes, (and still counting) makes reviewing a daunting task. So how about a shorter series, one like Suisei no Gargantia?

The series starts out in a space-like setting. We're given a brief description on the world and everything that's going on, later to find out that humans are no longer living on Earth, and now are organized and living in space. They fight for survival against a certain race of beings. We then meet Ledo, our protagonist. He's a lieutenant, and a participant in the battle, along with his robot like companion Chamber. We get to see a few moments of intergalactic battle, until the call for retreat is heard. Sadly a few fighters don't make it, one being Ledo as he is swallowed into a distortion of space of time. A sudden plot twist separates the anime from your generic mecha battles. 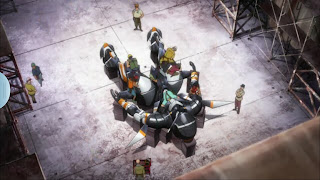 The end. No more protagonist means no more anime right? Well apparently not. We soon see a new setting and a new face. Our counterpart to Ledo, Amy soon appears. She runs through the scene, stopping at the sight of Ledo's Chamber. The others work on the robot, trying to open it up. They work through the day and night, but to no avail. 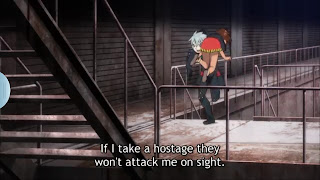 Finally Ledo wakes up from his beauty sleep, exiting Chamber after learning that the environment is safe. He is then found by workers, awkwardly taking Amy hostage to avoid any abrupt attacks. He is chased down until he reaches the outside of the building, which is completely different from the black void of space is he accustomed to. 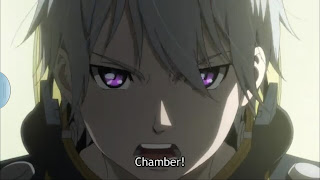 Being backed into a corner, he decides to rely on Chamber much to the surprise of the civilians. The episode ends as Chamber classifies this planet as Earth.

Alright, so far the anime has been pretty interesting. So far, there has been a lack of an opening, but it works in the favor of the series by giving a movie-like feel to the animation. The art is appealing but a bit too flashy at some points, but that's not necessarily a bad thing. (For example, the opening sequence involved bright flashes and lasers during the battle.)

Character wise, we haven't seen much. The main focus has been on Ledo, and other characters have yet to be named. Ledo also carries a common color scheme in the hair and eye department, white/silver and purple. Amy is a pretty unique character, with a darker skin pigment and somewhat traditional clothing. 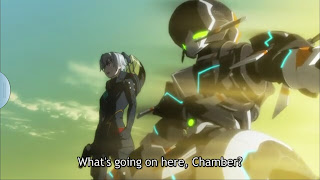 As for the plot, it's hard to comprehend what's going on in the beginning, but it's unsure if it really matters in the end, due to the plot twist. We're also left with a cliffhanger, and many questions that have yet to be answered. Music so far isn't a major factor.

The anime looks pretty good so far. Combined with the layout of the plot, the characters, and scenery, it contains remnants of a movie setting.
Anime Review Suisei no Gargantia Thoughts