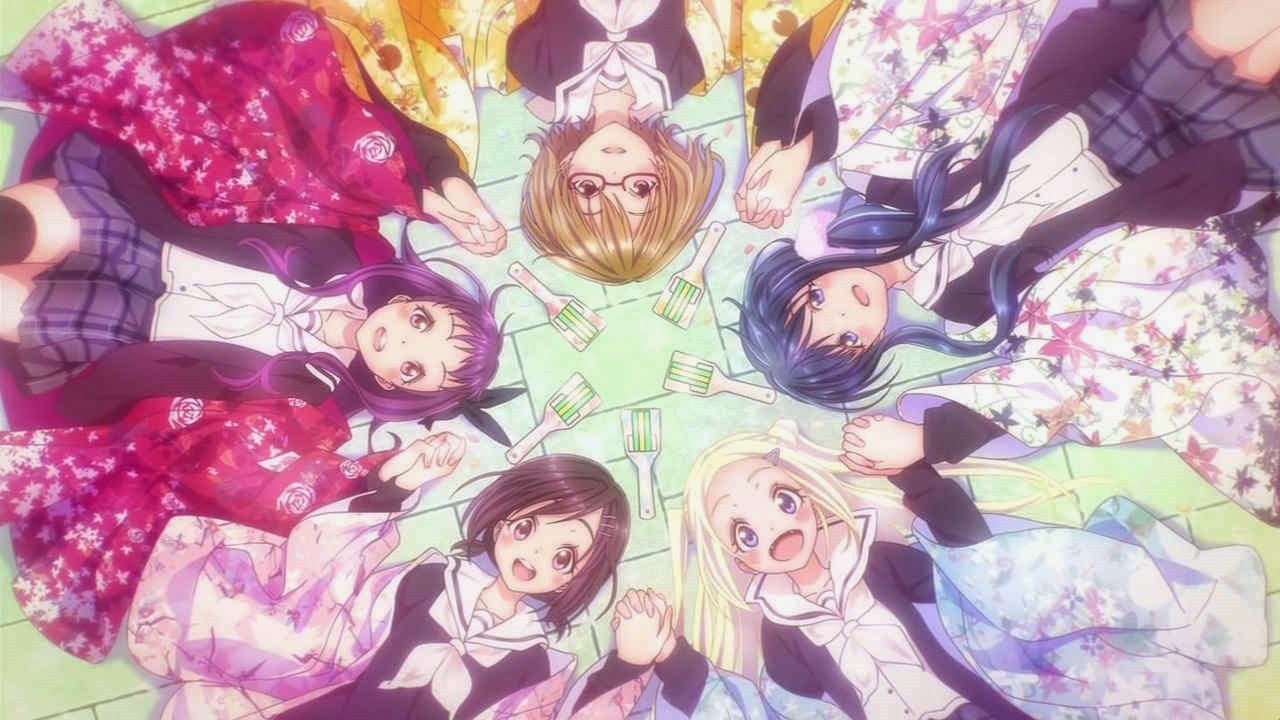 It's another slice of life anime! This time, we're delving into the world of dancing. Not just any style, but yosakoi dancing. What's yosakoi you say? Well keep reading and you'll find out more!

Hanayamata or HaNaYaMaTa, features an all-female cast with the focus of yosakoi dancing. While it's slice of life, the anime doesn't center mainly on school days, but mostly the interactions of the protagonist, Naru and a foreign student by the name of Hana, who has a love for yosakoi. The two come together and participate in their love of dancing. Shortly after, other characters are worked into the story.

So What is Yosakoi? 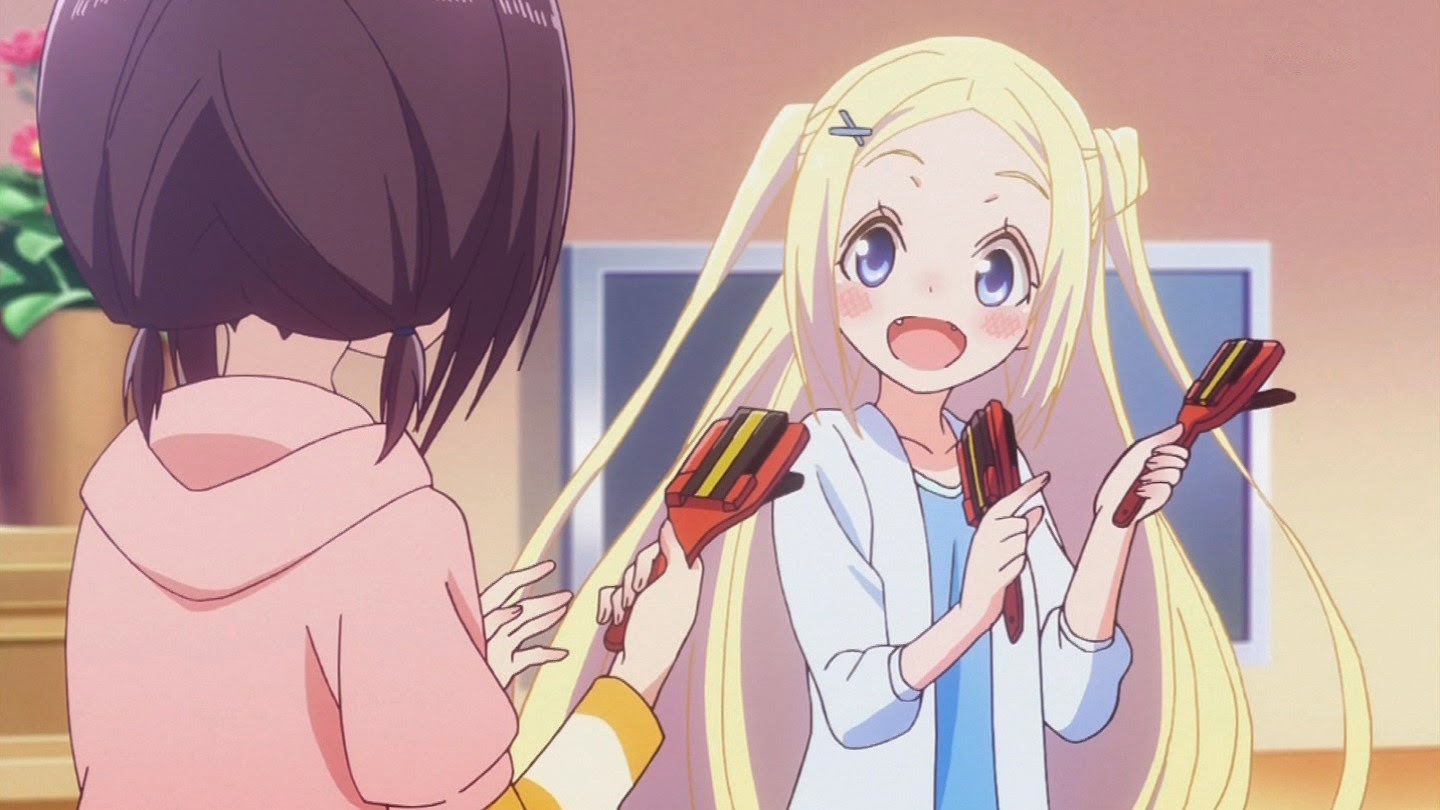 If you have no clue what yosakoi means, then here's a quick explanation. Basically, yosakoi dancing originated in Japan towards the mid 1900s. The focus of the dance is energetic and graceful movements. Also, the dancers tend to dress in colorful costumes that help accent their moves. Its basically a perfect mix of traditional and modern Japanese culture. Even though Hanayamata is focused on girls, yosakoi dancing is for both genders.

We can't have yosakoi without naruko! No, I'm not talking about a female version of Naruto. Instead, naruko are the small clappers that are used when dancing. Naru and naruko are pretty similar words, so if you remember the protagonist's name you can always remember naruko!

If you still have trouble remembering, then think about the following example. Have you ever attended a big sports event or some sort of rally? They sometimes hand out these objects that look like two hands clasped together. You shake them back and forth and they make a clapping noise. While they're not exactly the same, they are similar to naruko.

Here are some pictures! 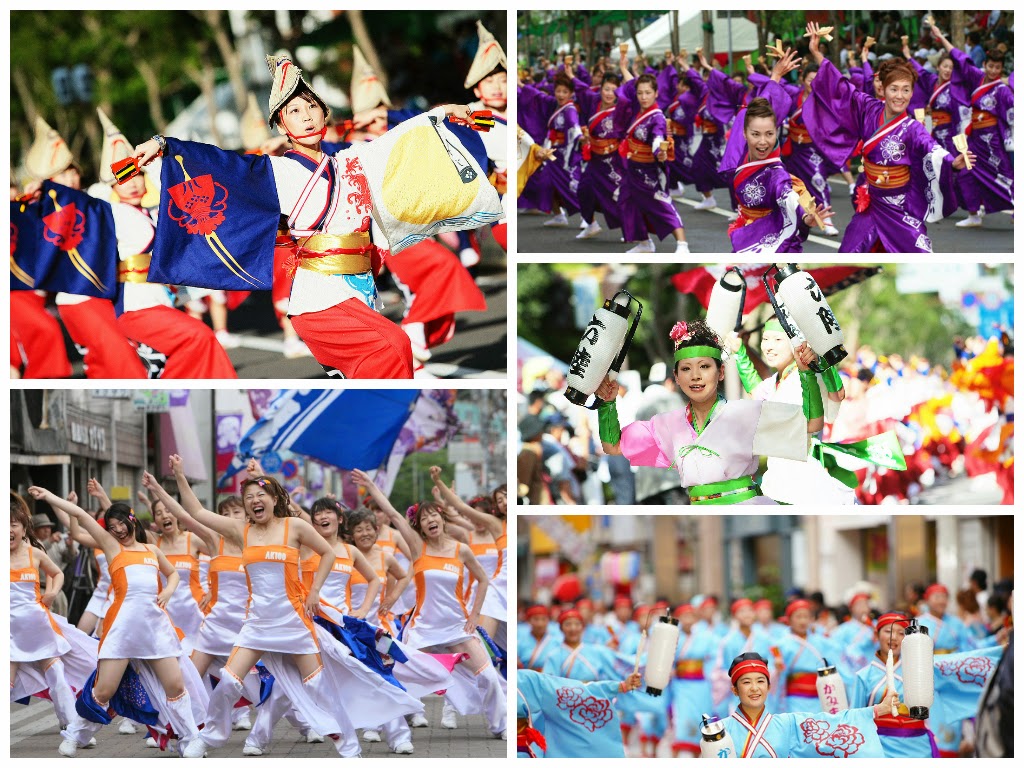 Hana N. Fontainestand - She's a transfer student from America. Upon their first meeting, Naru mistakes her for fairy. After much hard work, she's able to get Naru into yosakoi. Born May 2.

Yaya Sasame - They describe her as being perfect at everything. Despite this, she is Naru's friend and has been helping her since they were little. She has a few tsundere traits. Born June 1.

Sekiya Naru - Considered average at pretty much everything. She's very timid, but has a deep appreciation for the heroines in fantasy. Develops a love for yosakoi. Born April 2,

Machi Tokiwa - Tami's best friend and classmate. Some what tough and serious acting, but softens up around her friend. Born August 5. 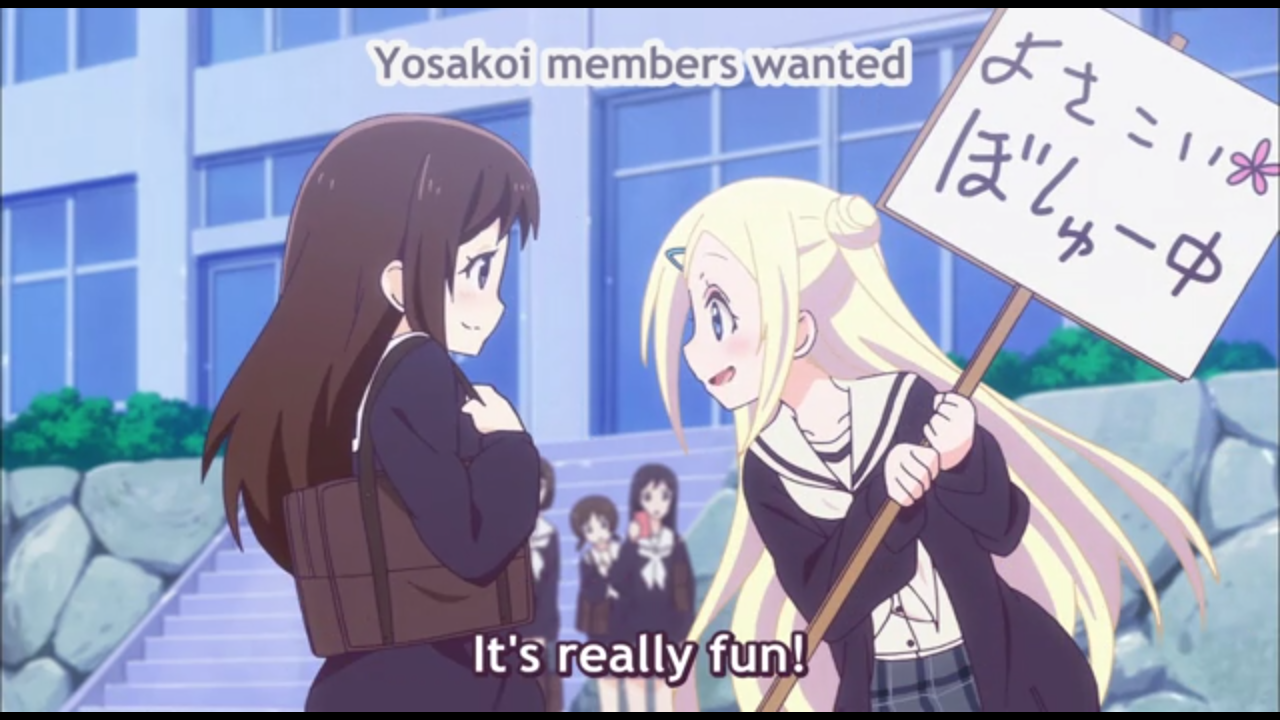 So far, I really like the anime. I have to admit, I haven't gotten through much of it yet and it's not even finished, but I'm enjoying it. I didn't even expect to watch this anime. The title just jumped out at me, similar to Ano Natsu de Matteru.

When it comes to graphics, the environment and colorful landscape is beautiful. With characters, I really like the art style. This anime has a unique drawing shape of the eyes. I'm not exactly sure how to explain it, but if you study the eyes, you'll see what I mean. When it comes to the plot, so far the story is working a bit different than I expected, but it's still pretty straightforward.

Aside from the self-explanatory plot, the relationship between Hana and Naru is interesting. 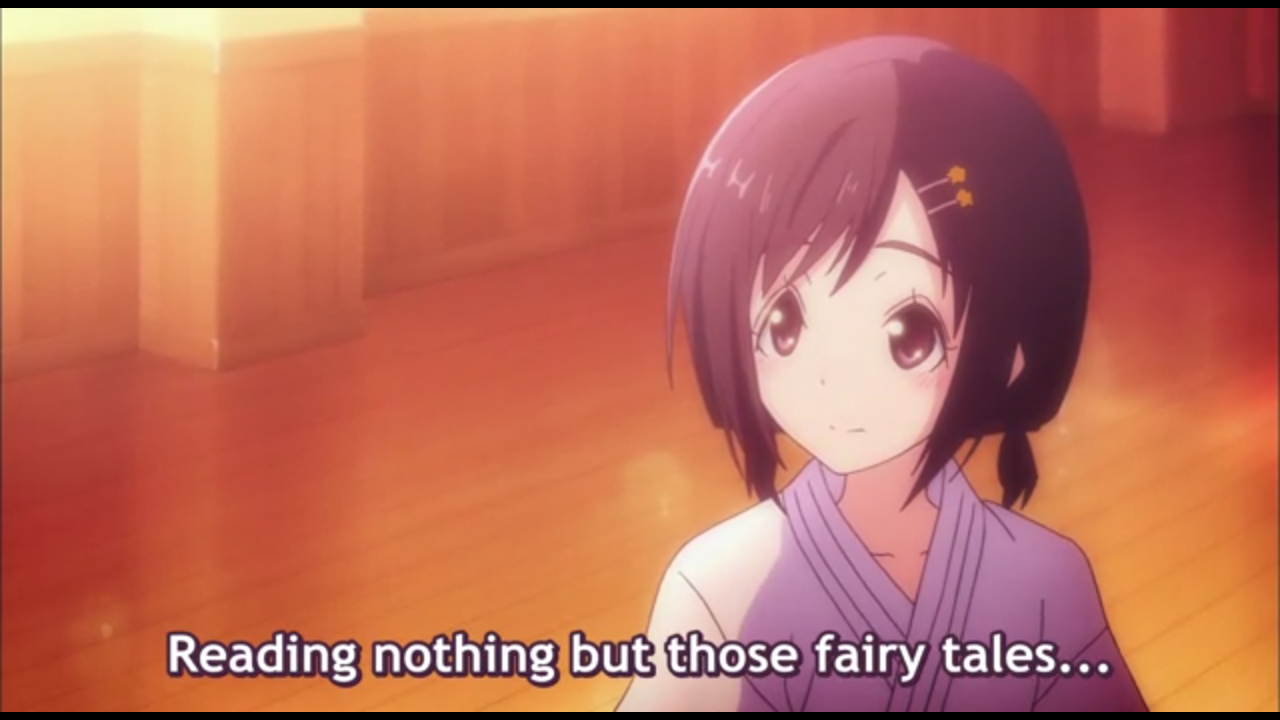 Usually the protagonists have fated meetings that ultimately lead to their interaction, but this came about a bit differently. Naru struggled to get Hana to leave her alone, and instead of a quick glance or stare, the two actually spoke and interacted during their first scene together. However, it still followed the pattern of one character changing another's life.

Another thing that is pretty interesting is the use of the environment to convey feelings and emotions. The characters are constantly projected on different heights and poses. Naru first sees Hana standing above her in the first episode, and she is accompanied by a beautiful background and colorful clothing. I think that in a way, Hana was a representation of the heroines that Naru adores, and the first impression of Hana was that of a beautiful figure of fantasy. (Thus she refers to her as a fairy.) 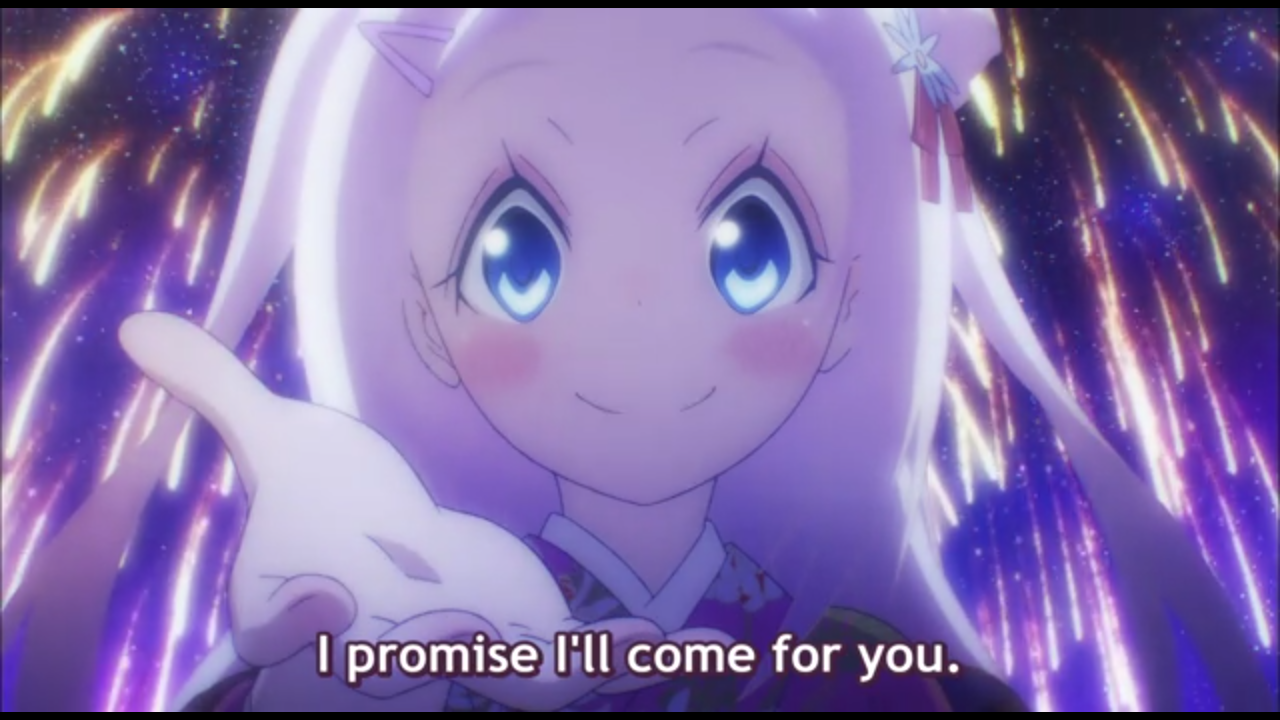 Later, even at school, Hana still remains to be above Naru in different settings. The theme of Hana looking down towards Naru, while Naru is looking upwards is common. Its not only until they look each other in the eyes on the same footing that they become friends. Being equals and not above or below each other, allows Naru to change and their friendship begins to blossom.

While in a way both characters are seemingly opposites, they are very similar and actually support each other. Hana, while being optimistic and jolly, is sometimes lonely. Naru, being somewhat timid and shy, is given the opportunity to gain confidence and passion through her friend. All Hana really wanted aside from pursuing her passion is a close friend. They balance each other out. 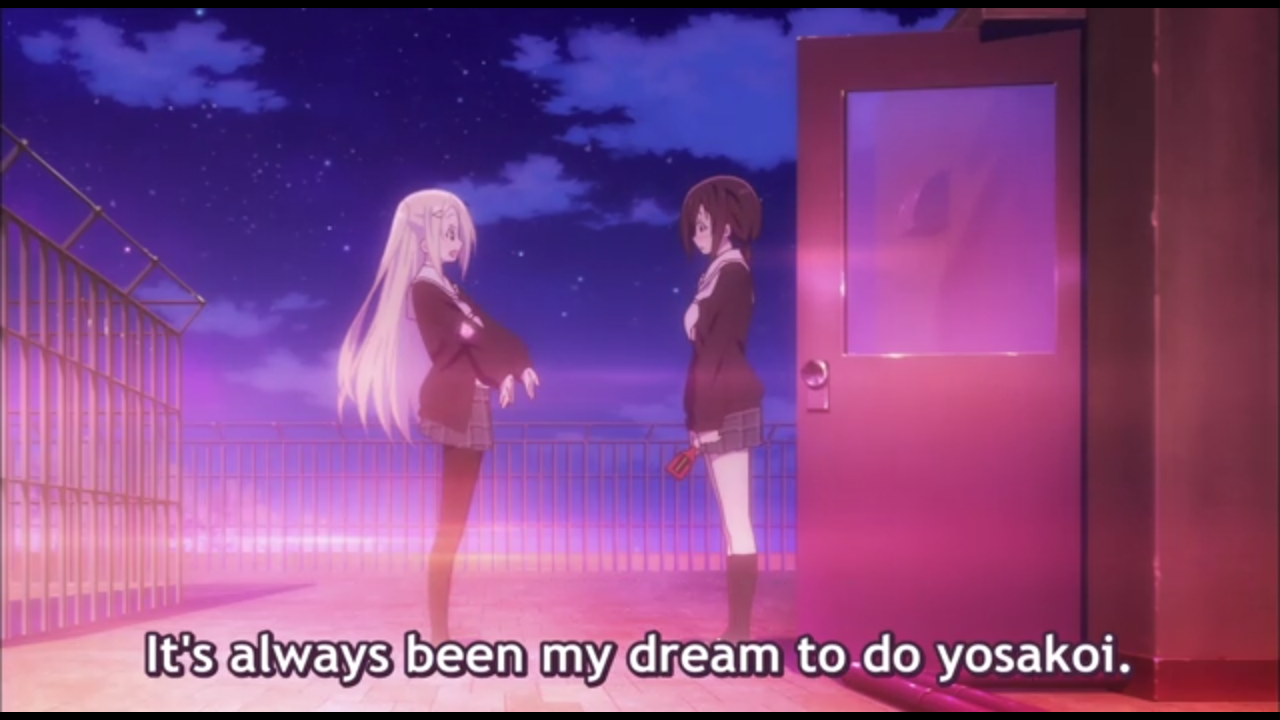 Despite everything else, I'm really enjoying the anime and I think I will continue to watch! I definitely recommend checking it out if you have the time.

Are you watching Hanayamata? What are YOUR thoughts?