Is Ash Ketchum Really a Failure? All of us who grew up and lived in the era of Pokémon know his name. That's right, Ash Ketchum. The main character, the young ten year old boy with Pikachu by his side. We've followed his adventures for many years now, despite Ash remaining young.

As a young boy, I never thought of Ash in a negative way, but as I grew older, Ash's character changed the longer the series went on, and I felt like he wasn't Ash anymore. He wasn't focused on beating others and only winning battles, but he became interested in friendship and helping his Pokémon out. He kept this mentality even if it meant letting go of some of his strongest Pokémon. 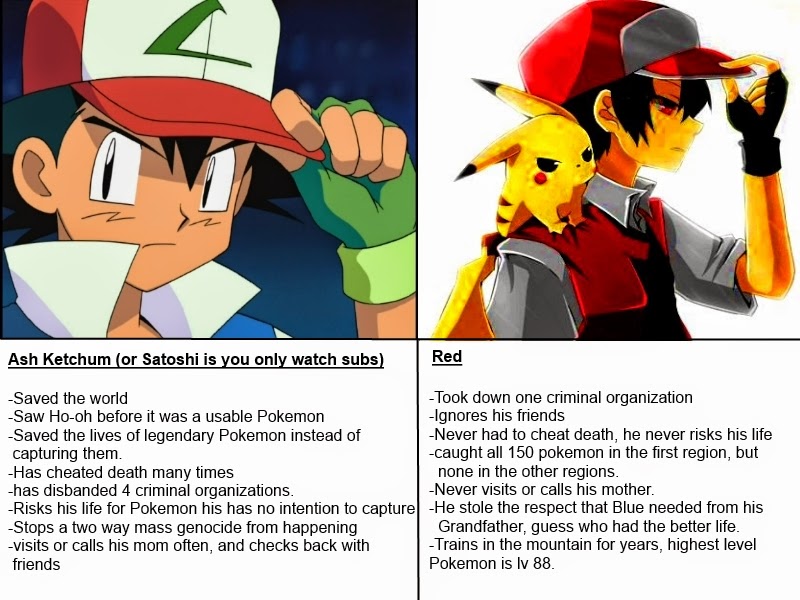 So some people might think that Ash has softened up, but does this really mean he's become a failure? Is he just a mere protagonist that follows in Red's shadow? No, I don't mean Red from the manga. I'm talking about the Red we know from the many Pokémon games, the silent protagonist that became a Pokémon master.

Well, I wanted to see what other people thought on the matter instead of going from one point of view. So I decided to do a few searches on this topic and was somewhat displeased at what I found.

So many people look at Ash Ketchum as a failure of a Pokémon Trainer. To be honest, the more I read, the more I agreed with that opinion. However, I had to realize that it wasn't my opinion, but their opinion. It's easy to go with everyone else and think what they think, but it's harder to stand out and be different. Sometimes I have to take a look at the things I say, and make sure I'm talking from me, not from someone else.

Anyways, this led me to realize that I actually like Ash as a character and Pokémon Trainer. Ever since I was young, I never disliked Ash until I was around others who couldn't stand him. With this in mind, let me give you all a couple of reasons why Ash Ketchum ISN'T a failure. Ash has slowly matured over time. Even though everyone isn't happy with his changes, we can say that Ash has developed a higher level of maturity than when he first started his journey. We can recall all the arguments he got into with Misty, destroying her bike, and causing other sorts of mayhem.

He was tasked with facing defeat, dealing with Pokémon that wouldn't cooperate easily, and constant obstacles that stood in his way. The way he reacted to some of these things could be considered childish. He was incredibly stubborn, did not always listen to advice, was rash, and took hasty actions. Now, he is more open-minded, and takes into account the thoughts and feelings of others. Even though he hasn't aged, he's definitely matured.

Ash cares for ALL of his Pokémon despite their differences. Pikachu and Ash didn't get along at first, and now he's his most trusted companion. Charizard didn't want to take orders, and ruined one of Ash's most important battles. However, Ash didn't toss Charizard out because of this, he instead worked with him and again, made a powerful ally. Which brings us to another point...

Believe it or not, he's become a better trainer. Charizard didn't take orders from Ash, basically because Ash didn't train him the right way. If Ash had been a better trainer, things would've been different. Even though he releases his Pokémon, that's a sign of the bond he shares between them. He's close enough to his Pokémon to let them free, instead of forcing them against their will.

The fact that he has such great selflessness when it comes to Pokémon is something that sets him apart from the rest. While we may count more losses than wins, it doesn't matter. Just as you cannot define the intelligence of a person by a grade, you cannot judge the strength of a trainer by their wins.

I'm not going to go into too much detail, but these are the main reasons why I believe Ash is NOT a failure. He may not be a silent protagonist that always wins no matter what, but I think people don't give him as much credit as he deserves, and he's a fitting main character for the Pokémon series. After all, Pokémon isn't all about winning battles and being the strongest, but about the friendships we make, the bonds with our Pokémon, and the fun times we have.
Ash Ketchum Editorial Nintendo Pokémon